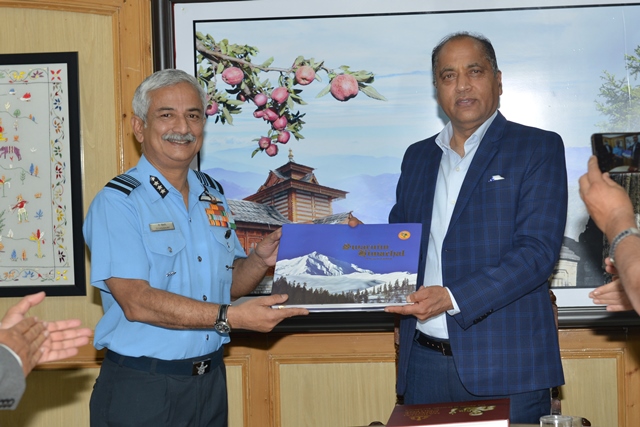 A delegation from National Defence College (NDC), comprising a team of 20 Army Officers from India, Nigeria, Uzbekistan, Bangladesh and Nepal to the rank of Air Marshal and Brigadier for ‘National Security and Strategic Studies’ on six day study tour from 5th April to 10th April, 2021, as part of Understanding India and Economic Security called on Chief Minister Jai Ram Thakur here today. It was a courtesy call.

The purpose of the study tour to this State was to get a closer view of different aspects of development, including various State Sponsored Programmes for Socio-Economic Development of the State.

While addressing the delegation, Chief Minister said that besides being called Dev Bhumi, Himachal Pradesh was a Vir Bhumi as over one lakh youth were serving the armed forces and similar number were ex-servicemen. He said that the first Param Vir Chakra was won by Major Som Nath Sharma, who hail from Himachal Pradesh, besides that out of four Param Vir Chakras given during the Kargil conflict, two were won by the brave sons of the soil. He said that the State Government had initiated several welfare schemes for betterment of ex-servicemen and families of serving soldiers. He said that Ex-Servicemen Welfare Corporation has been established for ensuring welfare of the ex-servicemen, besides providing ample opportunities to them in government service.

Jai Ram Thakur said that the State could also boast of immense potential in tourism, industries, hydro power, adventure sports and allied sectors. He said that the State has also made its presence felt in sectors such as apple production, off season vegetables and natural farming. He said that the Atal Tunnel Rohtang dedicated to the Nation by Prime Minister Narendra Modi on 3rd October last year, has opened the land locked Lahaul valley for the tourists. He said that this tunnel besides ensuring all weather connectivity to the tribal district was also important from strategic point of view.

Chief Minister also detailed various welfare schemes initiated by State Government for welfare of the people and development of the State.

Air Marshal Commandant D.Chaudhary, AVSM,VM,VSM thanked the Chief Minister for sparing his time for sharing his views with the delegation.  He also presented a memento to the Chief Minster.

Several members of the delegation shared their experiences with the Chief Minister.