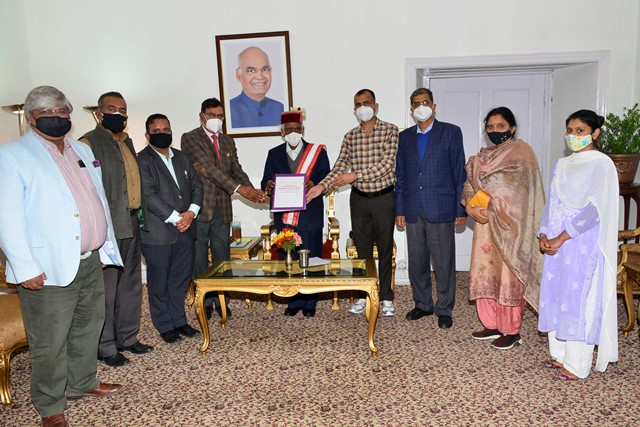 A delegation of Defenders of Human Rights led by Major General (Retd) Atul Kaushik, I.D. Bhandari, former DGP HP and Raj Kumar Verma, CEO, Sai Foundation called on Governor Bandaru Dattatraya at Raj Bhavan on Tuesday and presented a letter signed by 114 prominent people regarding the gross violation of human rights in West Bengal and seeks immediate action. They presented the memorandum to the President of India through the Governor.

In the letter, they have blamed that democracy and Rule of Law are fast eroding in the State where the constitutional machinery has completely failed. “The entire nation is in a state of shock to see the worsening law and order condition with increasing instances of unchecked dehumanizing acts such as rape, murder, arson, looting and threat which tend to foster a climate of complete breakdown of state machinery”, have mentioned in the letter. They said that the law enforcement agencies have failed to protect the citizens with the required degree of responsibility against the illegal acts being committed and their failure on this account was so blatant that incidents of brutalization were not even being reported due to fear of leave alone registration and investigation of such offenses.

They pointed out that silence, wilful ignorance, and support of the genocidal regime on the part of State machinery need to be addressed on an emergent basis. The magnitude and brutality of the post-poll violence in West Bengal is an Indicator of a complete breakdown of law-and-order machinery of the State, they cited.

Justice (Retd.) Surinder Thakur is the President of the Defenders of Human Rights.