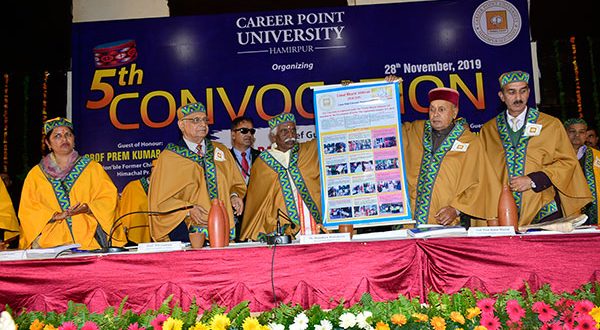 Governor Bandaru Dattatraya has stressed the need to focus on skill development and vocational education, to empower youth in making them self–employed. This will put a check on migration from village to cities and beyond the boundaries of Nation.

He was speaking as Chief Guest on 5th Convocation of Career Point University in Hamirpur, today.

On the occasion, the Governor said the education system should be designed to prepare more employment creators and not employment seekers. “It is our objective to transform our youth from job-seeking segment to job-providing category”, he said and added that there was an urgent need for skill development in students enrolled in higher education institutions. He said that it could be achieved by creating an education system that highlights the importance of entrepreneurship and prepares the students to get oriented towards setting up of enterprises. In addition to this, such a banking system is required to be evolved that provides venture capital to graduates who have aptitude and keenness to create their own new enterprises and by creating a class of entrepreneurs who produce the competitive products for becoming successful in their missions, he added. He appealed the faculty and students to take due advantage of the government initiatives like Skill India, Make in India, Digital India, Innovate and Start-Up India, etc. 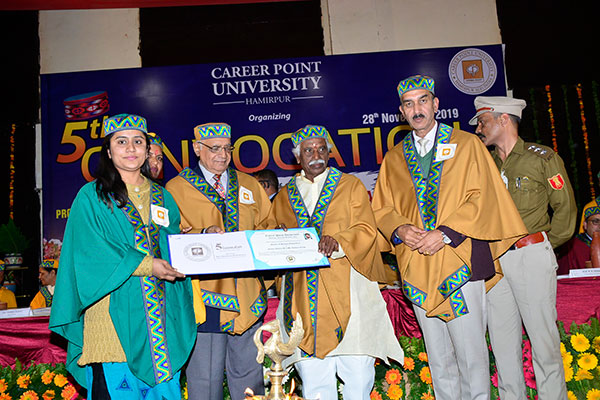 Shri Dattatraya said that higher education was the key to making available a large pool of skilled manpower for the nation. But, the education system of our country was burdened with demands of both quantity and quality, he added. He said that in India, Gross Enrolment Ratio(GER) in higher education, at present, was 25 per cent, although India aims at attaining GER of 30 per cent by 2020,  and it was still much behind countries like China and America. He expressed satisfaction that Himachal Pradesh with GER of 36.74 per cent was among the top six states of country that has registered GER higher than the national average.

He said that a university should provide the turf for free expression and exchange of ideas and opinions. This makes the institution, academically and socially, a vibrant place. He said that it was a matter of satisfaction that about 1745 students, out of which 1050 boys and 695 girls were studying in this University purely in rural landscape.  He called upon the teaching community to equip the youth with relevant skills fostering creativity and innovation for revitalizing the rural economy. He appreciated the initiative that has been taken by the Career Point University by adopting 20 villages where faculty, students and village people were working hand-in-hand to troubleshoot the problems and find suitable solutions thereby benefiting one another.

The Governor awarded 25 gold medals and 524 degrees to meritorious students of the university. He congratulated the students for successful completion of their course of studies and appealed to work diligently in future and contribute meaningfully towards nation-building. 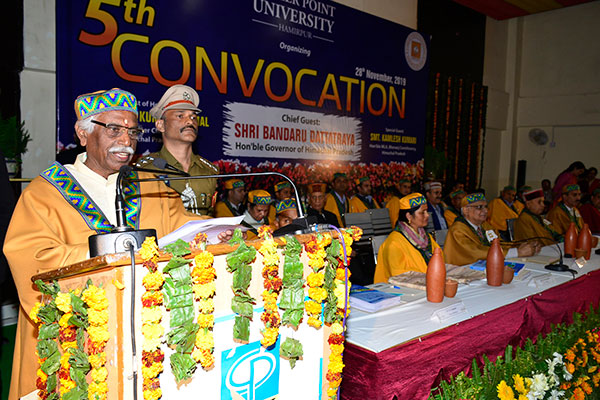 The Governor also released the Kul Geet and publications of the university on the occasion.

Prof. Prem Kumar Dhumal, former chief minister welcomed the Governor in his home district and congratulated the authorities of Career Point University for organizing fifth convocation. He said that state and country have more expectation from students and he hoped that they would meet the expectations.

Earlier, Prof. P.L.Gautam, Pro-Chancellor of CPU honoured the Governor on the occasion.

Prof K.S. Verma, Vice-chancellor welcomed the Governor on the occasion and detailed the progress report of the university. He said that students of the university were performing well at national level and many innovative projects were being carried out by the university.

Kamlesh Kumari, Member of Legislative Assembly, Members of the Board of Management, Members of the Academic Council and   prominent people were also present on the occasion.