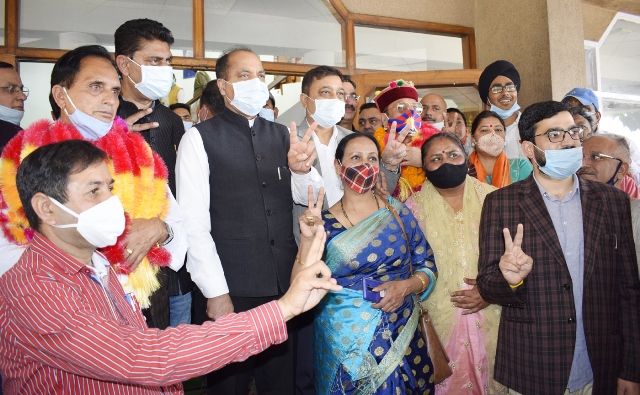 Chief Minister Jai Ram Thakur has asked the local health and administrative authorities to declare a place or locality as Mini containment Zone where over five Corona positive cases are reported.  Frequency of testing should be increased and people should be encouraged to vaccinate themselves. He urged the local bodies and NGOs to come forward and help the State Government to educate people in fight against the resurge of Corona virus which is more potent and deadly than the last year.

He was presiding over a virtual meeting to review the Covid-19 situation in Kangra and Chamba districts after the new surge of the pandemic.

Thakur said that the number of active cases has been on rise in both the districts and the persons under home isolation should be monitored regularly. They should be guided properly to keep their morale high and should be provided thermometer, oximeters and medicines by the health authorities. Keeping in view the increasing number of new patients, bed capacity at Tanda Medical College should be increased. The death rate carried by the second wave is highly alarming and is not sparing even young generation.

Chief Minister said that keeping the Navraatees in view, all devotees visiting temples and other religious places should avoid overcrowding and their effective regulation should also be ensured. The State Government has allowed temples to remain opened, but at the same time organizing langars, bhandaras and kirtans have been banned. Strict guidelines have been issued following the decision of the State Cabinet to check the entry of people from seven high load states into HP. All the visitors coming to the State will have to carry a negative report, which should not be older than 72 hours from any of the recognized ICMR centres.

Jai Ram said that the newly elected members of the PRIs must work pro-actively and constantly to help their localities in dealing with this dreadful virus. They should take a lead to educate the public to strictly adhere the SoPs issued by the Government from time to time. He said that they should encourage the public and ensure that they wear face masks properly and adopt Covid-19 apt behavior including social distancing, sanitization and avoid public places unless it is too urgent.

Earlier, in the morning after arriving on his a day long tour here at Dharamshala, the Chief Minister heard public grievances in the circuit house.

Later on, while talking to the media persons after election of mayor and deputy mayor for Dharamshala Municipal Corporation held today, he congratulated the newly elected Mayor; Deputy Mayor including all Councillors.  He said new impetus would be given to the ongoing development projects in Dharamshala worth Rs. 150 crore for which foundation stones were laid in 2019.  These projects, witnessing a slow pace, will now be augmented. In addition to these works, various projects worth Rs. 100 crore have also been initiated during the last three months. He said that there is no dearth of essential equipments, items, medicines and facilities in the State in fight against Covid-19. The State has ample number of PPE kits, ventilators and other related items. He urged to keep the politics at bay in fight against Corona. 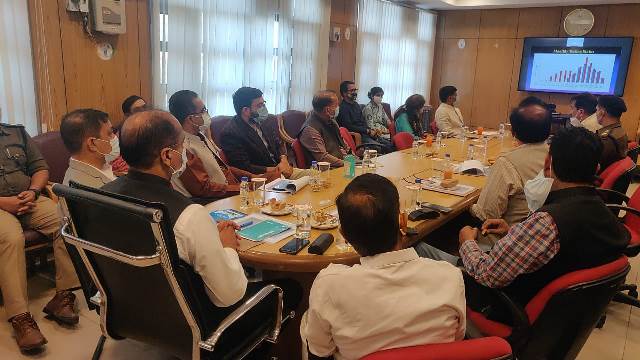 While interacting with the media persons at Dharamshala Police Ground, he said that Himachal Pradesh being a major tourist place in the country welcome advent of lakhs of tourists every year. Tourism, being the major employment sector and the on-going tourist season, no tourist coming to the State can be denied entry. The State suffered last year owing to the spread of Corona in the country and this year too, the Covid-19 resurge can mar the ongoing tourist season.  As such no tourist coming to Himachal can be denied entry. Instead, Himachal Government is ensuring that all the steps taken to prevent the Virus spread should be followed strictly and SoPs issued from time to time should be implemented in letter and spirit for all, including tourists and hoteliers.