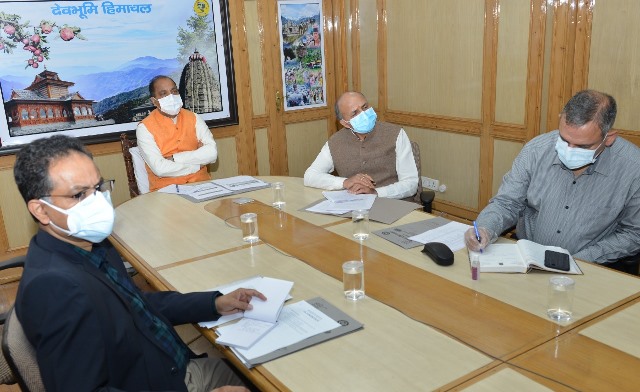 Chief Minister Jai Ram Thakur while presiding over the review meeting regarding Covid-19 situation through video conferencing from Shimla with Deputy Commissioners, Superintendents of Police, Chief Medical Officers and Principals of Medical Colleges in Himachal Pradesh directed them to ensure effective implementation of corona curfew imposed in the wake of sharp surge of Covid-19 cases in the State.

Chief Minister said that Deputy Commissioners and Superintendents of Police must ensure that general public strictly adheres to SoPs issued by the State Government from time to time to check spread of Corona virus in the State. He said that in the present circumstances the priority was not only to ensure safety of the citizens of the State but at the same time ensuring that economy of poor and down trodden was also the responsibility of the Government.

Jai Ram Thakur directed the officers to bridge the gap between home isolation and hospitals as it has been felt that the fatality rate in the State was increasing due to delay in shifting of serious patients in home isolation to the hospitals which was matter of concern. He also directed the health department to ensure maintenance of smooth supply chain of oxygen, PPE kits, medicines and other logistics during the corona curfew.

Chief Minister said that all the deputy commissioners must also ensure increase in testing besides enhancing the bed capacity in their districts. He said that adequate manpower must be provided through rationalization and outsourcing to man the makeshift hospitals. He also asked for optimum use of oxygen and other sources during the pandemic.

Health Minister Dr. Rajiv Saizal while thanking the Chief Minister for working round the clock to check spread of this pandemic by motivating political leaders, officers, doctors, para medical staff and other stakeholders to work with missionary zeal to tackle the pandemic.

Chief Secretary Anil Khachi said that the implementing agencies must ensure effective sharing of resources in wake of the pandemic. He said that special thrust must be laid on strengthening home isolation mechanism and steps should be taken to remove social stigma associated with the disease.

Secretary Health Amitabh Awasthi also detailed about the steps being taken to control this pandemic.