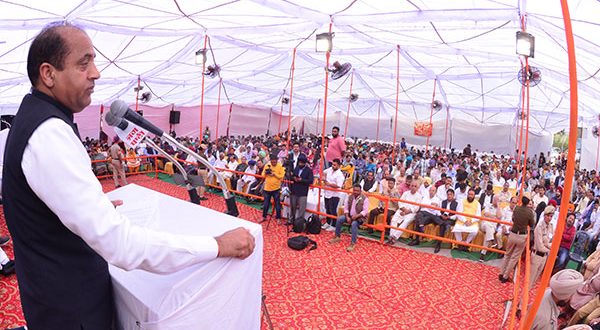 Family members of martyrs will not be charged toll tax in Himachal: CM

Chief Minister Jai Ram Thakur said that the family members of the martyrs would be exempted from paying toll tax while entering the State of Himachal Pradesh as a mark of respect to the martyrs. He stated this while presiding over the 116th function of Shaheed Parivar Fund at Jalandhar today.

The Chief Minister said that the Hind Samachar Group besides upholding high standards of journalism was also doing a great job by providing relief to the victims of terrorism. The Group not only waged a battle against terrorism by its fearless and factual writing, but also provided financial support of the victim families of terrorism. He said that in this fight against the terrorists the Group lost its finest editors in form of Lala Jagat Narayan and Ramesh Chand and also 62 journalists.

Jai Ram Thakur said that the contribution made by the Hind Samachar Group for upholding the unity and integrity of the country was commendable and inspiring. He said that it was the duty of each one of us to ensure that the families of the martyrs lead a respectable life. He said it was inspiring that the Group has provided assistance to 9846 families.

The Chief Minister said that media was the fourth pillar of our democracy and the Group has shown way to the others that how one can keep the high standards of journalism, besides coming forward to provide help to the needy. He also prayed to the Almighty to give strength to the family members of the martyrs.

He said that under charismatic leadership of Prime Minister Narendra Modi, our nation was forging ahead on the path of progress and prosperity. Several historic decisions have been taken during the last few years which include abrogation of Article 370 and 35 A, abolishing Triple Talaq etc. Now the Kartarpur Corridor has been opened for the Sikh devotees by Pakistan, he added. 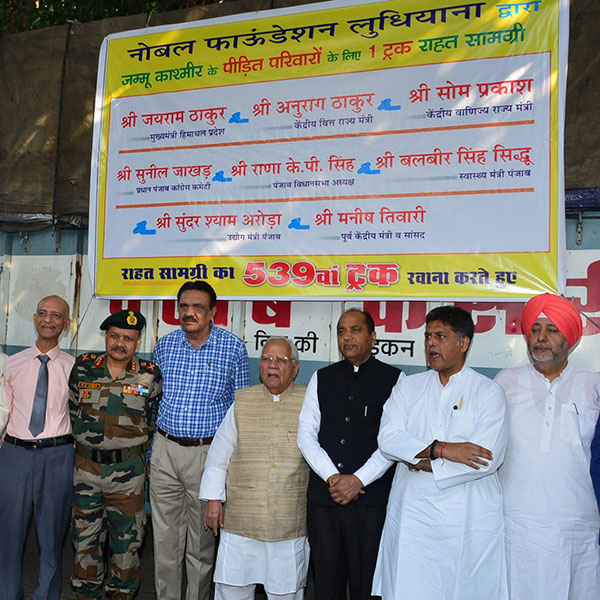 Jai Ram Thakur said that menace of drugs was not less dangerous than the demon of terrorism. He urged the civil society to come forward to eradicate this vice from the society. He said that on his initiative the neighbouring State have now decided to form uniform strategy to check this menace. He said that people’s participation was most vital only than it could be made a success.

He announced contribution of rupees five lakh towards the Shaheed Parivar Fund on the occasion.

Earlier, the Chief Minister flagged off the 540th truck of relief material.

The Chief Minister also released a book on the occasion.

Deputy Chief Minister of Haryana Dushyant Chautala thanked the contributors for helping the families of martyrs.

Union Minister of State for Finance Anurag Thakur thanked the Hind Samachar Group for fighting terrorism in the State of Punjab and keeping the high standards of journalism. He said that in this war against the terrorists, the Group lost its finest editors.

Former Deputy Chief Minister of Jammu and Kashmir Kavinder Gupta said that terrorism was the biggest challenge before our nation but it has emerged as a biggest challenge for the world as well, which needed to be crushed by one and all. He also praised the Hind Samachar Group for the commendable work. He welcomed the decision of the Supreme Court regarding Shri Ram Janmabhoomi. He said that each one of us should be ready to serve his motherland in which ever capacity he or she can. He said that as many as 19 mobile medical units were being started by him in his Parliamentary constituency which has provided free treatment to lakhs of poor and needy patients. 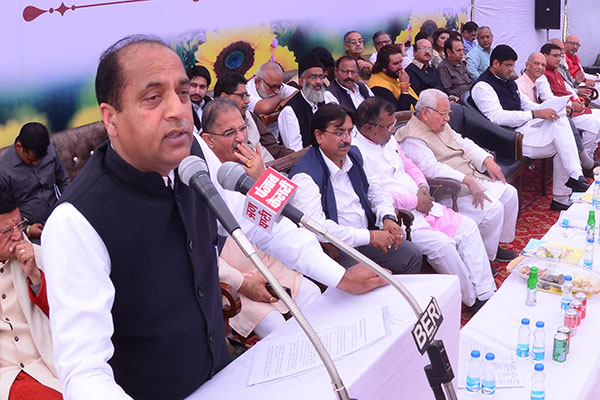 Forest Minister of Punjab Sadhu Singh while appreciating the services rendered by the Hind Samachar Group in providing a helping hand to the needy at the time of distress said that it was vital to understand the pain of the others and provided the some relief.

President of Punjab Pradesh Congress Sunil Jhakhar said that the decision of opening Shri Kartarpur corridor was indeed laudable and would strengthen the bound for brotherhood with the neighbouring country. He said that the nation was proud of its armed forces who were ensuring that our borders were safe and we could have a safe and secure environment.

Former Union Minister Manish Tiwari said that the Shaheed Parivar Fund was indeed doing a commendable service in providing relief to the families at the time of distress. He said that every Indian should welcome the decision of Hon’ble Supreme Court regarding Shri Ram Janmabhoomi.

Member Shaheed Parivar Fund Relief Distribution Committee and Former Minister of Punjab Baldev Raj Chawala said that 539 trucks have been flagged of till date to provide relief to the needy.

Family members of Pulwama martyrs were provided a cheque of rupees one lakh each by the Shaheed Parivar Fund.