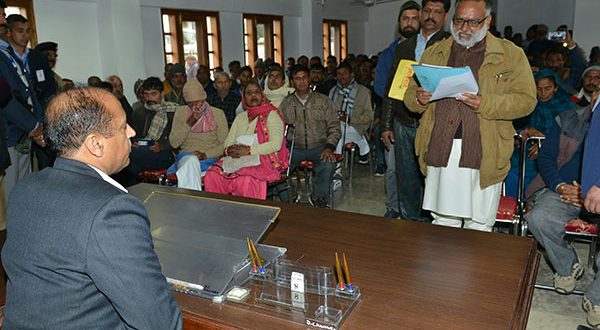 The State Government was committed to ensure that the Pong Dam Oustees were rehabilitated properly so that this long term issue was settled once forever. This was stated by the Chief Minister Jai Ram Thakur while addressing a delegation of Pong Dam oustees led by the former Revenue Minister Dr Rajan Sushant at Dharamshala today.

Chief Minister said that he has personally taken up the issue of the Pong Dam Oustees with the Chief Minister of Rajasthan and urged him to ensure that the Pong Dam Oustees from Himachal Pradesh must be properly rehabilitated as they have provided their fertile land to construct Pong Dam, which have ensured prosperity in Rajasthan. He said that not only this, he has also taken up the issue in the meeting of Northern Zonal Council (NZC) held at Chandigarh during the month of September this year under the chairmanship of Union Home Minister Amit Shah.

Jai Ram Thakur said that the people of the State has always upheld the national interest and had provided their fertile land for construction of Pong Dam in the country. He said that he has suggested the Union Home Minister to constitute a Coordination Committee of the Relief and Rehabilitation Officers of Himachal Pradesh and Rajasthan Government for time bound settlement of pending issues of rehabilitation of Pong Dam Oustees of Himachal Pradesh. He said that he has also urged the Centre Government to constitute a National Level Committee for monitoring of this issue.

Previous: Governor stresses for protection of human rights of the prisoners
Next: UAE Ambassador lauds efforts of Himachal in organising Global Investor’s Meet