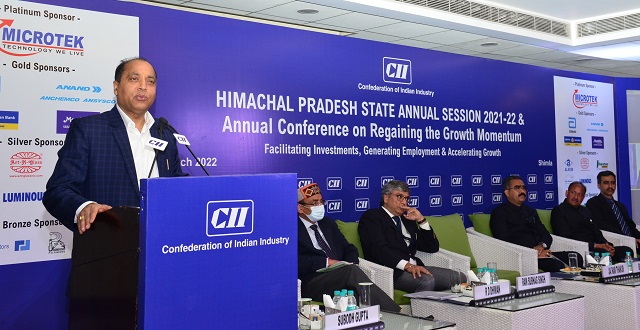 The State Government was committed to make Himachal Pradesh a Most Favoured State of the country for investment by providing best possible facilities to the entrepreneurs to ensure Ease of Doing Business. This was stated by the Chief Minister Jai Ram Thakur while addressing the annual conference, Regaining the Growth Momentum of Confederation of Indian Industry (CII).

Jai Ram Thakur said that all the business related processes have either been made online or were being done. He said that in the present era of liberalization, it was endeavour of the State Government that there was minimal interference in the business

Jai Ram Thakur said that the State Government has succeeded in getting approval of   setting up of Medical Device Park to be built at a cost of Rs. 261 crore on 265 acres of land in Nalagarh area of Solan district.  He said that this would ensure investment of about Rs. 4000 to 5000 crores and turnover of about Rs. 20,000 crores which would generate employment opportunities to estimated 10,000 people of the State.

Chief Minister said that the State Government has actively bid under the Bulk Drug Park Scheme of the Government of India and have sent a project report of  Rs. 1190 crore for setting up of this park on 1405 acres of land in Una district. He said with the investment of about Rs. 8000 crores would ensure turnover of Rs. 50,000 crore. He said that this Park would also provide direct employment to about 15,000 youth of the State.

Jai Ram Thakur said that the State Government was also actively taking up the issue of rail connectivity to industrial areas. He said that new Industrial area would be established in Parwanoo on 180 bigha land and additional 200 bigha land would be identified soon.

Chief Minister said that CII was a prestigious organization of the country which gives an impetus to the industrial development in the State. He said that outcome of this annual conference, Regaining the Growth Momentum would go a long way in keeping with the spirit of the theme of this conference.

Subodh Gupta and Gagan Kapoor were elected as the Chairman and Vice Chairman of CII Himachal Pradesh State Council respectively, for the year 2022-23. Subodh Gupta, is the Chairman and Managing Director of Microtek Group, having global footprints in Power solutions and Healthcare field and Gagan Kapoor is the Proprietor of Pulkit Industries, dealing in the Packaging and Food processing Sector. Previously, he has led the Himachal Pradesh corrugated Manufacturing Association for five years.