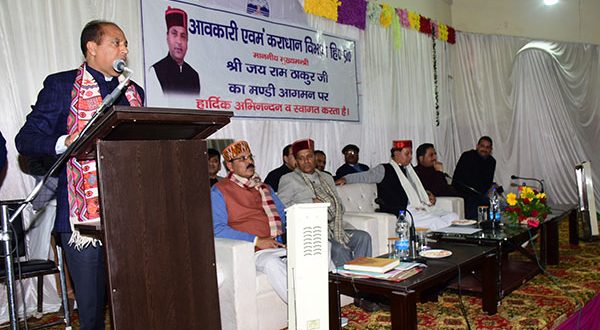 While presiding over the meeting with the Excise Licensees at Vipasha Sadan in Mandi today, Chief Minister Jai Ram Thakur said that the main thrust of the State Government was to increase revenue through excise tax collection.

Jai Ram Thakur said that stress should be laid on exploring the scope of using fruits in all wines which have potential to transform the economy of the horticulturalists. He said that the State Government would also explore possibilities for commercial production and patenting of Anguri and Chuli beverage of Kinnaur.

Chief Minister assured the Licensees that the Government was open to their suggestions and would take appropriate steps in this direction.
Principal Secretary to the Chief Minister and Excise and Taxation Sanjay Kundu welcomed the Chief Minister and said that stress should be laid on production of wine based on fruits. He said that this would not only help strengthening the economy of the farmers, but would also provide quality wine to the consumers.

Commissioner Excise and Taxation Ajay Sharma presented vote of thanks.