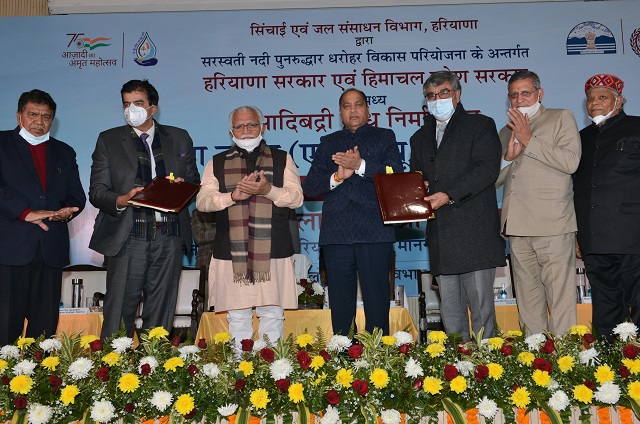 Saraswati River to be rejuvenated with estimated cost of Rs. 215.35 crore

A MoU was signed between the Government of Himachal Pradesh and Government of Haryana for construction of Adi Badri Dam on 77 acres in Himachal Pradesh near Adi Badri area of Yamuna Nagar district of Haryana at Panchkula today in the presence of Chief Minister Jai Ram Thakur and his Haryana counterpart Manohar Lal Khattar for rejuvenation of Saraswati River with an estimated cost of Rs. 215.35 crore. Chief Secretaries of both the States signed the MoU on behalf of both the States.

While addressing this historic event, Chief Minister Jai Ram Thakur said that with the signing of this MoU, the dream of Prime Minister Narendra Modi would be fulfilled who has shown his commitment to revive the Saraswati River while addressing the people on 3rd April 2014 at  Kurukshetra.

Jai Ram Thakur said that the project would also be of immense useful for Himachal Pradesh as 3.92 hectare metre water per annum would be earmarked for Himachal Pradesh for drinking water requirement and 57.96 hectare metre for irrigation water demand of the project affected habitations. He said that the Dam would not only be used primarily for revival of Saraswati River, but also help in water conservation in the region. He said that entire funding of the Project would be arranged by the Haryana Government. He said that both the Governments would be free to prepare the Tourism Projects as well as any other infrastructure facilities which may be required for welfare and development of local people from their own resources, without compromising primary objectives of the project.

Jai Ram Thakur said that on completion of this Project, River Saraswati would again come alive. He said that out of the total proposed area, 31.16 hectare land falls in Himachal which include 0.67 hectare private land and 30.49 hectare forest land. He said that the Dam would get 224 hectare metre water from Somb River of Himachal Pradesh that falls in Yamuna near Adi Badri in Yamunanagar district. He said that that HPPCL would be executing agency for construction of Adi Badri Dam and its related infrastructure.

Additional Chief Secretary IPH Haryana Anurag Rastogi welcomed the Chief Ministers of both the States and other dignitaries present on the occasion.