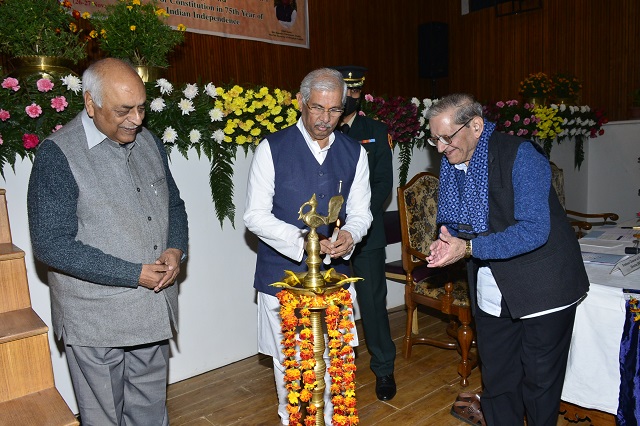 Governor Rajendra Vishwanath Arlekar said that the Constitution of India is the social, cultural conception of Indianness, whose soul and spirit lies in its Preamble. It was the duty of every citizen to make every effort to realize the ideals of the Preamble.

He said that the spirit of our Constitution lies in the Preamble, which was a guide for the nation on the basis of the basic features of the Constitution. More than that, the core of its Preamble was humanity, he added and said that such a humanity in which the feeling of welfare of the entire living world was pervasive, not only human beings. He said that along with literal knowledge, there was a need to understand its sense.

Shri Arlekar said that existence, democracy and system were inherent in our nature and even today at many places even at village level, one main person has the ability to decide and guide the whole community.

“How we treat others is the true definition of religion and this is the spirit of our existence, which we have to maintain”, said Arlekar. While congratulating on Constitution Day, he said that it gave us an opportunity to share the great values of justice and equality.

Chairman, IIAS Kapil Kapoor said that Indian society and tradition has been based on the self-governing principle and this was the reason that despite all the political challenges, our culture and civilization survived, as our autonomous units used to work here. He said that in our ancient culture ‘Panch’ was called ‘Parameshwara’. He detailed the difference between responsible government and self-government. He said that our society was dutiful and duty was a harmony oriented concept and such a person was respected in our society who sacrifices.

Director, IIAS Prof. Chamanlal Gupta said that the Amrit Mahotsava of Independence is a matter of pride and joy for all of us but it was a time to assess the period. He said that there was a thought of fraternity in our cultural spirit and this heritage has been received only by us in the world.

Earlier, Secretary of the Institute Prem Chand welcomed the Governor and informed about the various sessions of the symposium.