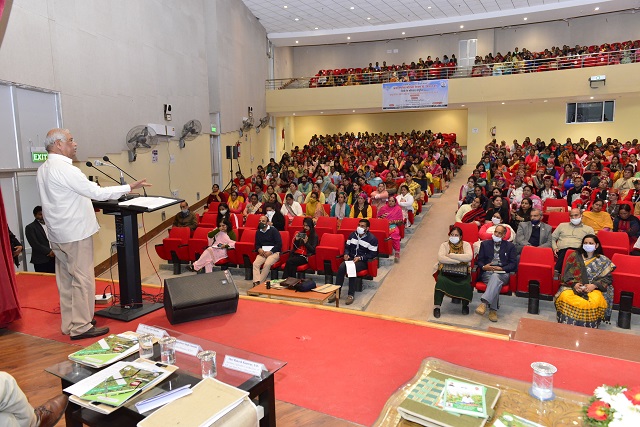 Governor Rajendra Vishwanath Arlekar said that the enthusiasm with which women farmers of Himachal were adopting natural farming method was an example and inspiration for the country.

The Governor was addressing a workshop on Natural Farming organized for women farmers at Dr. Y.S. Parmar University of Horticulture and Forestry, Nauni in Solan district, today. This workshop was organized under Prakritik Kheti Khushal Kisan Yojana in which more than 800 female farmers participated.

The Governor said that the contribution of women farmers was inspiring and due to their contribution, Himachal remains a leading State in natural farming in the country.  He said that the Prime Minister Narendra Modi also gave the credit of natural farming to the farmers of the State. I have assured the Prime Minister that soon the number of farmers adopting this method will be doubled here, said the Governor and said that active participation and cooperation of women farmers would be required in this direction.

He termed natural farming as the doctor of the household as the products of natural farming were beneficial for health.  He said that this method was not new and it has been our traditional practice. He expressed contentment that 1.68 lakh farmers were associated with it in the State and 55 percent women were practicing it and giving new direction to the State. He said that 25000 acres of land has been brought under it.

Prof. Parvinder Kaushal, Vice Chancellor, Dr. Y.S. Parmar University of Horticulture and Forestry welcomed the Governor and said that
the experience of women in natural farming was really inspiring, which would help in expanding this farming practice further.  He said that there has been negative results of chemical farming but the results of natural farming were encouraging. He called upon the farmers to adopt it completely.  He also briefed about the work being done by the University in the interest of farmers and orchardists.

Rakesh Kanwar, Secretary Agriculture said that this program was dedicated to the women of the hills as the real credit for the success of natural farming in Himachal goes to the women.  He said that the Central Government has made a provision of Rs. 1500 crore for the expansion of natural farming.  Similarly, in the budget, the State Government also proposed to bring 50 thousand hectares of land under this agriculture system, make 100 villages as natural farming villages, certification of 50,000 farmers and make shops in every district of the state to sell natural farming products.  He said it was reported that by adopting this farming method, the income of the farmers has increased by 27 percent.