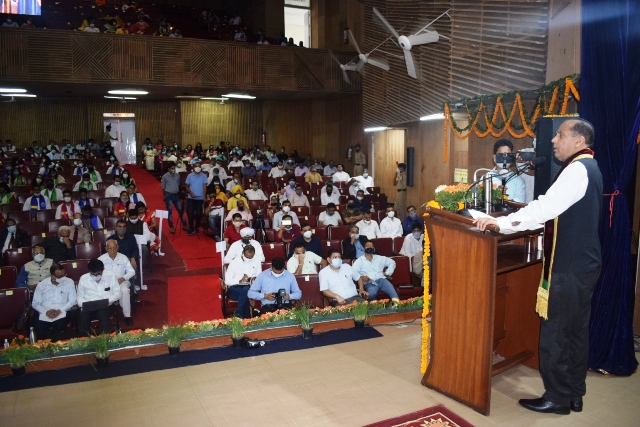 While delivering his address, the Governor appealed to the young scientists and degree holders to become job givers instead of job seekers, for which they should move towards self-employment. Their knowledge should benefit the society and the agricultural community in particular. He added that apart from the academic contribution, the contribution should also remain in the agriculture sector of the state. He said that youth were the assets of the country and should contribute towards nation building activities. He said that the nation could develop only when youth were focused, disciplined and growth oriented and urged them to inculcate good values like discipline, patriotism, sincerity and devotion.

Shri Arlekar said that innovation through research and technology would be helpful in self-dependence of the farming community at large. While congratulating the gold medal winners, all degree recipients and esteemed alumni, the Governor said that the sapling planted in the form of this university by former Chief Minister Shanta Kumar on November 1, 1978 today had become a center of high learning in the country. He said that the vision given by Shanta Kumar needs to be taken forward and it was our responsibility to contribute in this direction. 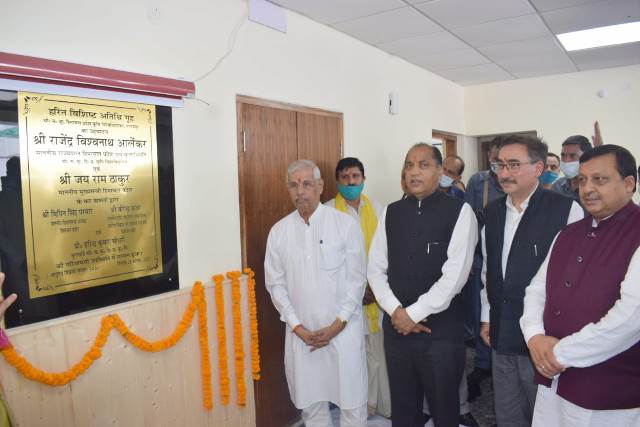 “I would especially say to the students who have obtained graduation and post-graduation degrees that they should work with dedication towards society, nation and state. You have to make good use of the education and knowledge given by this university”, said Governor.

While addressing the Convocation, Chief Minister Jai Ram Thakur said that Chaudhary Sarwan Kumar Agriculture University was one of the leading Universities in agricultural research and education in the Himalayan States of the country. He said that about 90 percent of the population of Himachal Pradesh lives in rural areas with agriculture as main occupation. The research in agriculture becomes all the more important in strengthening the economy of the State. Thus, one cannot even think of development of the State without development of the rural areas. Keeping in view, the contribution of agriculture, the State Government has launched various schemes to improve productivity, generate employment and increase family income, he added.

Jai Ram Thakur said that even during the Corona pandemic, the support provided by the agriculture sector was immense. He said that the world economy was adversely affected, but the farming community ensured that firm support was provided to the dwindling economy of the country.The nation was fortunate to have a strong leadership in form of Prime Minister Narendra Modi to successfully bail out the country from this crisis. He said that despite all odds the Prime Minister ensured that the country becomes self-sustainable in essentials such as PPE kits, ventilators and now even vaccine. He said that today the country was successfully running the biggest vaccination campaign of the world.

Chief Minister said that the Prime Minister was concerned about the welfare of the farming communities of the country and has started Kisan Samman Nidhi Yojna to provide financial assistance to the farmers particularly during the pandemic. As many as 9.32 lakh farmers of the State have been provided financial assistance of Rs. 1350 crore under this scheme. He said that the State Government was implementing Prakritik Kheti, Khushal Kisan’ scheme to increase the income of farmers without chemicals and with less investment. The JICA Project has been implemented in all the districts of the State, which will increase the area under fruits and vegetables. He said that the State Government has launched ‘Mukhyamantri Khet Sanrakshan Yojana, for protection of crops from monkeys, wild animals and stray cattle. He said that the State has entered 51st year of Statehood and suggested the University to organize an event to showcase the journey of the State in the field of agriculture sector.

Chief Minister said that research on agricultural production techniques, different crop varieties, land and water management, use and conservation of biological resources, water storage, disease and pest control techniques for different areas was vital not only to ensure optimum use of our natural resources and increase crop yield, but also strengthen the economy of the farmers. He said that this University has emerged as a premier of agriculture University in the country and credit of this goes to the hard work and dedication of the teaching and non-teaching staff and students of this University. He also wished the medal and award winning students a very bright and successful future.

Earlier, the Governor and the Chief Minister dedicated the Harit VVIP guest house constructed in the campus by spending an amount of Rs 1.13 crore.

Former Chief Minister Shanta Kumar said that he was fortunate that this University was established about 43 year ago when he was the Chief Minister of the State and during all these years, this University has created a special niche for itself amongst the Agriculture Universities of the Country. He said that it was due to the hard-work, toil and research of the scientists of the Agriculture Universities that today India was self-sustainable in food grains production and capable of providing free ration to about 80 crore people of the country during the pandemic. He said that devotion to duty was no sacrifice but a mere show of our existence, thus we should live for others and for the society to make out existence fruitful.

H.P. Vidhan Sabha Speaker Vipin Singh Parmar while congratulating the medal winning students and the students who were provided degrees, congratulated them as their hard work and dedication have borne fruits. He said that even during the Corona pandemic, the economy of the State could sustain due to the sound base provided by the agriculture sector. He said that Prime Minister Narendra Modi had a vision to double the farmers’ income of the country by the year 2022. He said that to achieve this objective, the role of agriculture scientists was vital. He said that this University was one of the premier University of Agriculture in the country.

Vice Chancellor of the University Prof. Harinder Kumar Chaudhary welcomed the Governor, Chief Minister and other dignitaries present on the occasion. He said that as many as 393 students were being awarded degrees during this convocation including 262 graduate, 110 post graduate and 21 Ph.Ds. He said that eight students would be awarded University Gold Medals whereas two alumni Nand Lal Sharma and Tilak Raj Sharma would be honoured on the occasion. He also detailed various research and academic works being carried out by the University. He said that the University would also start registering 51 indigenous unique products/commodities of traditional crops of Himachal with various national agencies from this golden jubilee year.
Agriculture Minister Virender Kanwar, MLAs Arun Mehra, Mulk Raj Premi and Ravinder Kumar, Chairman Woolfed Trilok Kapoor Chairman MILKFED Nihal Chand Sharma, former MLA Praveen Kumar, Vice Chancellor Dr. Y.S. Parmar University of Forestry and Horticulture Nauni Prof. Parwinder Kaushal, CMD SJVNL Nand Lal Sharma, Professors and students of the University and parents of the award winning were present on the occasion among others.