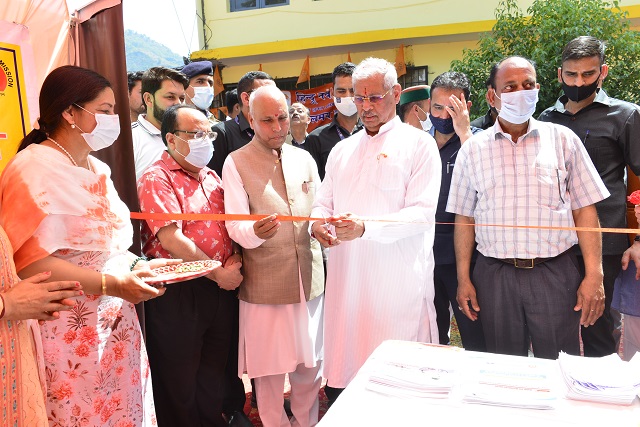 Governor Rajendra Vishwanath Arlekar called upon the people to cooperate in social cause being undertaken by the people towards nation building. He said that such persons provide direction to the society and help in upgrading the life of the people.

The Governor was speaking on the occasion of the foundation stone laying ceremony of “Madhav Yog Ashram” at Madhav Srishti Parisar at Gan Ki Ser in Solan district on Monday.

Shri Arlekar said that yoga complexes like Madhav Srishti Parisar were necessary for the society as works were being done here on various projects, due to which many people were associated with this noble work.  He said that there were many people in the society who were suffering from nostalgia and believed that everything was not proper in the society.  However, there were also many who did Karma Yoga by connecting the society.

Appreciating the efforts of Srinivas Murthy, the Founder of Madhav Srishti Yogashram, he said that he was associated with Karma Yoga in the true sense, which was a source of inspiration for others.  He said that there were many problems in the society but an accomplished person makes his contribution by joining social projects.

“Society has given us a lot, so it is our responsibility to contribute to the society only then our life will be meaningful”, said Shri Arlekar.

He said that our nation has existed for centuries and we have given the idea of nobility to the world.  We still gave the message of love and brotherhood to the world, he added.  He said that such yoga ashrams make our thoughts stronger.

On this occasion, the Governor announced a grant of Rs.10 lakh to the Madhav Yog Ashram from his discretionary grant.

On this occasion, the Governor also honoured the people who contributed towards the construction of Manav Srishti Yog Ashram.

Sanjeevan, Uttar Kshetra Pracharak said that yoga means to join and to connect the individual with another individual, nature and God.  He said that Prime Minister Narendra Modi has given international recognition to Yoga and today again the glory of Yoga was reaching every house.  He added that work efficiency only comes from yoga and in the present pretext peace in the world was going to come only from yoga.  He said that although yoga was the subject of society but when it became the subject of our life only then our life would be meaningful.

Sriniwas Murthy, Founder of Yog Bharti welcomed the Governor on the occasion and said that Yoga was the identity of inner power and those who had awakened this inner power saved the universe.  Explaining the power of yoga, he said that the development of the soul was possible only by the development of body, mind and intellect.  He also threw light on benefit of indigenous cow rearing and havan system.

Earlier, the Governor laid foundation stone of “Madhav Yog Ashram” to be constructed at a cost of Rs. 6 crore at Madhav Srishti Parisar, Ashwani Khade at Gan Ki Ser in Solan district. He also visited the exhibition put up by different departments of district administration and by Prakalp of Madhav Srishti Parisar and evinced keen interest in it.