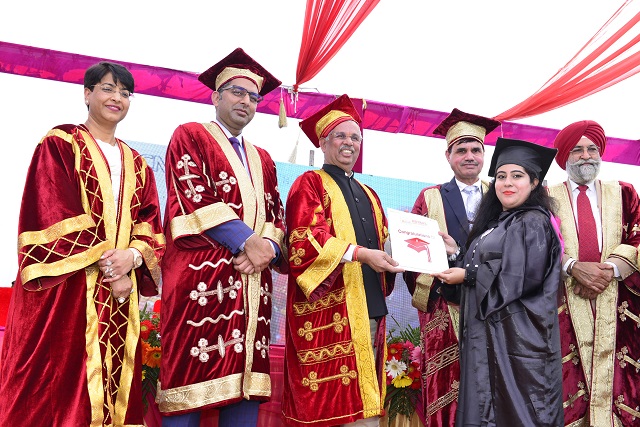 Governor Rajendra Vishwanath Arlekar conferred degrees to 210 students of Aryans Group of Colleges at Chandigarh today in its 10th Convocation. He was the Chief Guest of the function.

While congratulating the students on the occasion, the Governor said that degree holders have to decide for themselves whether they want to become a job creator or job seeker. “The process of learning in life does not end, but from today is the beginning of new education and achieving new goals”, said Shri Arlekar. He exhorted the students to develop the ability to lead the society and move ahead by examining the opportunity. He said that youth were the assets of the country and should contribute towards nation building activities. He said that the nation could develop only when youth were focused, disciplined and growth oriented and urged students to inculcate good values like discipline, patriotism, sincerity and devotion.
Shri Arlekar said that the new education policy was going to fulfill the objective of all round development of the students.  He said that the Indian education system was based on Gurukul practice but today the system of education we have adopted, demands a job after degree. Ultimately, we could not connect to the ground, he added.  He said that only our young generation could change it as they were the future of the country.

He stressed on new innovations so that the society could be benefitted. He said that society should get the benefit of the degree received by the students, as many people have contributed in this degree.

Dr. M.P. Poonia, Vice Chairman, All India Technical Education Council, New Delhi (AICTE ) said that it was not merely a convocation but a new beginning for another challenging life.  “Students of today are the Founders of tomorrow’s Nation. We need to bring down the strong boundaries that we have put on the students to help them grow in their desired field”, he said. He added that Students should also have the right kind of attitude to grow and have success in life, they should be open to learning, be creative and think about societal problems. He advised the students to become a good citizen and work day and night to earn success for themselves and entire Country. Be proud of being Indians and to have studied in India as we have excelled in all fields, he added,

Dr. Shahid Iqbal Choudhary, Secretary, Tribal Affairs Department of Jammu and Kashmir added that he had heard a lot about innovations done by Kashmiri students of Aryans. He said that Kashmiri students are very intelligent and they have a lot of potential for innovations. He further added that it was a matter of pride for the entire Kashmir Valley that the students were taking care of the people of their valley and innovating social projects for them which could also change the life of these people.

Dr. Anshu Kataria, Chairman, Aryans Group of Colleges welcomed the Governor and detailed about the academic activities of the college. He said that it was a proud moment for Aryans to add these young talents for the progress of the Society. “We don’t need Funds from our alumni, but we want these students to Earn Name and Fame for themselves, Society and their Nation in the coming years”, said Kataria.

Dr. Parveen Kataria, Director General of Aryans Colleges proposed a vote of thanks.
Prof. Roshan Lal Kataria, Mrs Rajni Kataria (Founders), officials of the management of Aryans and other prominent people were also present on the occasion.