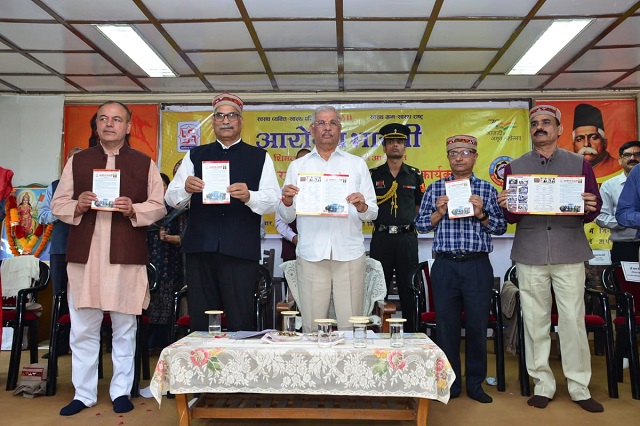 While emphasizing on restoring the traditional system of medicine in India, Governor Rajendra Vishwanath Arlekar said that due to the usefulness of Ayurveda, this system of medicine has started getting special recognition and attention all over the world.

The Governor was speaking while presiding over the “Bal Raksha Kit free Distribution Program” organized by Aarogya Bharti Shimla here today. The program was organized in collaboration with Himachal Shiksha Samiti and All India Institute of Ayurveda, New Delhi.

To enhance the immunity of children, Shri Arlekar said that such programs were being organized all over the country. He said that Ayurveda was a traditional system of medicine, whose roots were so deep that it has never expired as it was associated with our culture.

“We grew up and remained healthy by the use of medicinal plants planted in the courtyard of our house. Tulsi plant is still grown in our courtyard”, he said.

The Governor said that the ‘Vaid’ tradition was very old in Himachal and they were expert in proper use of herbs. He said that the way of life which we have left, needs to be re-established. Expressing concern, he said that we have considered our traditional system of medicine as an alternative, while it was the main system of treatment. Today, it was being taken forward in the country and in future ‘Integrative Medicine System’ was being considered, under which work was being done towards integrated medicine by combining Allopathic, Ayurveda, Homeopathy, he added.

Appreciating the efforts of Aarogya Bharti, the Governor said that it was working towards the health of the children. He said that the organization was playing important role in encouraging the old traditional system of Ayurveda in the country which was commendable.

The Governor also released Aarogya Bharti leaflet on the occasion.

The Governor distributed Bal Suraksha kits to the children on the occasion.

Joint Director, All India Institute of Ayurveda, Delhi Dr. Umesh Vasant Tagade said that AIIA was poised to become the premier Ayurveda Institute of the country. The institute has 25 specialist OPDs and played an important role during the Corona period and no one died under treatment in his institute. He was detailed about various departments, courses and other activities started in AIIA.