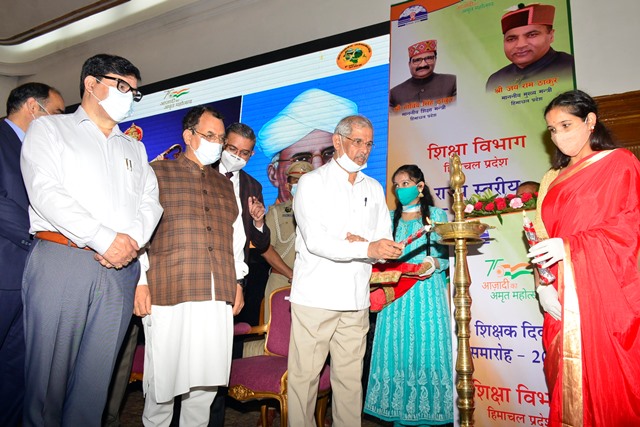 Governor Rajendera Vishwanath Arlekar today conferred State Awards upon 17 teachers and honoured one with National Award for the year 2021 in an impressive State level function held at Peterhoff Shimla on the occasion of Teacher’s Day.

The Governor paid rich tributes to late Dr. S. Radhakrishnan, former President of India, on whose birthday Teacher’s Day is celebrated throughout the country. He termed Dr. Radhakrishnan as a veracious personality, nobel laureate, academician and an able administrator. He said that his ideas were related to the culture of India and he was confident that the education related to Indian tradition would be re-implemented in the country.

Shri Arlekar said that the role of a teacher is quite immense in the society as he guides the society. He said that society exists because of the teacher. He said that in our ancient culture, Guru has been given the status of God as no work was completed without Guru. He said that the relationship of teacher with student was constant and from this point of view his role as a guide was important. He builds the future generation and sets the ideal, he added.

The Governor expressed concern that lack of moral values and character, be it personal or social, lag the nation behind. Therefore, this day was a day of introspection, he added. He said that the process of making good human beings should be the basis of education. The overall objective of development of children was to build a strong nation, so teachers have the obligation to imbibe moral values to the students.

“Teaching is a noble profession and carries a huge responsibility because the conduct, character and thoughts of teachers influence the students and therefore, they should perform their duties honestly and sincerely”, said the Governor.

While congratulating the awardees, he appealed the teaching community to work with more commitment and dedication. He said that National Education Policy (NAP) was the first step of ‘decolonalize’ our education system. We should contribute to the NEP whatever little we can contribute to it. So, take a pledge to contribute in this direction which will be a true tribute to Dr. S. Radhakrishnan”, said Arlekar.

Urban Development Minister Suresh Bhardwaj said that Himachal Pradesh has made unprecedented development in the field of education, the credit of which goes to our teachers. He said that when Himachal came into existence the literacy rate had been 10-12 per cent which was above 86 per cent today. The number of schools, colleges and universities were quite large and school facilities were available even in last corner of the state where our teachers were serving, he added. He said that the people of the state also have the feeling of getting education and made every effort to get education even with meagre resources. As a result, we were at the top position in the field of education, he said.

He said that under the leadership of Chief Minister Jai Ram Thakur, the state was progressing rapidly in the field of education. Besides infrastructure development, quality facilities were also being provided in educational institutions so that the students could compete at the international level. He said that with the implementation of National Education Policy, the country would move forward on the path of development and we would achieve the pinnacle of progress. 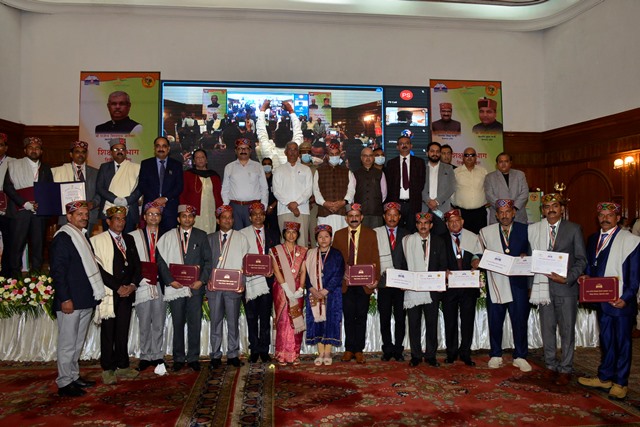 Education Minister Govind Singh Thakur honoured and welcomed the Governor and said that the State Government was committed to the development of the education sector. He added that 11,23,283 students were associated with this sector in the state and today, 79,234 teachers and 17,934 non teaching employees were contributing in this sector. He said that from first January 2018, the services of 4,838 teachers of the state have been regularised, which was a history in itself. In the Higher Education the services of 537 Assistant Professors, 2,475 Lecturers, 334 DPEs, 466 Clerks and 791 Class IV employees have been regularised, he added.

He said that 5,814 posts have been filled by those who have been looking for promotion for years. He said that from January 2018, the state government has made recruitment of 8,136 teachers while the process of 5,095 posts was under process. He said that in the current financial year 4000 vacancies of teachers of different categories were being filled for which all the formalities have been completed at the departmental level.

Secretary Education Rajiv Sharma, welcomed the dignitaries on the occasion and briefed about various activities and achievements of the education department.