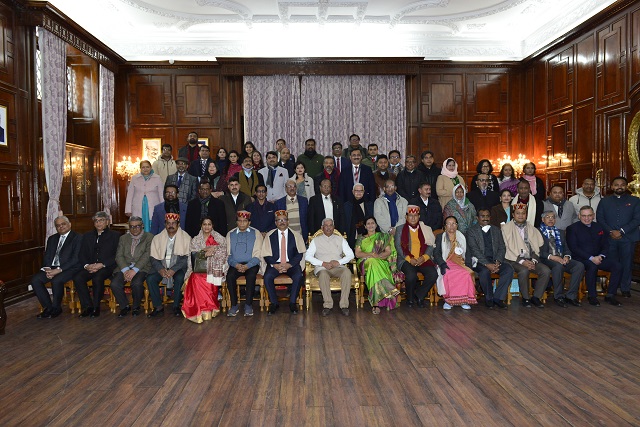 Governor Rajendra Vishwanath Arlekar hosted a dinner in honor of the members of the Foundation of India and Bangladesh at Raj Bhavan yesterday late evening. On this occasion, dignitaries from both the countries including the Minister of State for External Affairs of India, Rajkumar Rajan Singh and Minister of State for External Affairs, Bangladesh, Mohammad Shahryar Alam were present.

India and Bangladesh Foundations are jointly organizing their 10th  Friendship Dialogue in Shimla to mark the 50th anniversary of Bangladesh-India relations.

While welcoming the guests, the Governor said that it was the ‘golden phase’ of the cordial India-Bangladesh relations. This close bond of 50 years helped in bringing us more closer through such activities. Congratulating the Bangladesh and India Foundations, he said that this flow of relations was continuously deepened due to their meaningful initiatives. He added that apart from being bound by a common civilization heritage, the two countries share common values of democracy that are desired for peace, stability and prosperity. Under the leadership of Prime Minister of India Narendra Modi and Prime Minister of Bangladesh Sheikh Hasina, have set an example of healthy neighbourly relations.

“India is a peace loving nation. After the liberation of Bangladesh, we showed humanity by respectfully releasing the war prisoners of Pakistan. While referring to Rajbhavan, Shimla, the Governor said that the building in itself embodies the glorious history, which is also associated with the People’s war of Bangladesh and added that it was in Rajbhavan in 1972 that the historic ‘Shimla Agreement’ was signed between the then Prime Minister of India Indira Gandhi and President of Pakistan, Zulfikar Ali Bhutto.

The Governor hoped that the serene atmosphere and scenic beauty of Shimla would always be part of their pleasant memories. He hoped that they linked the hospitality of Himachal and that their visit would be pleasant.

On the occasion, Shri Arlekar also honoured the members with Himachali cap, shawl and memento.