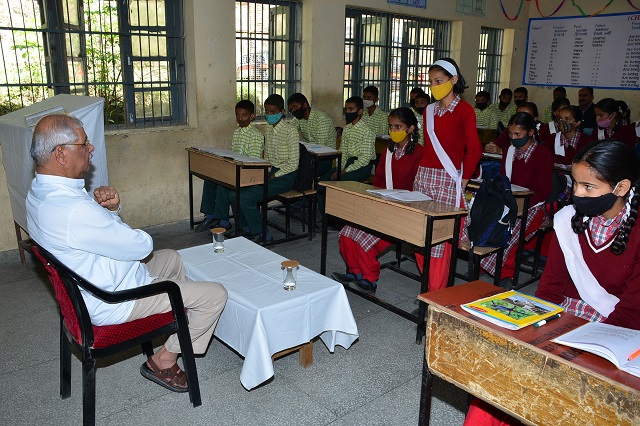 Governor Rajendra Vishwanath Arlekar visited the Government Senior Secondary School, Baldeyan under Mashobra development block near Shimla today. He interacts with the students of 9th standard of the school.

The Governor has taken an initiative in the state. He interacts with the students by visiting government schools and encourages them to develop the reading habit by presenting them with books. Recently, he had also visited the Government Daleep Senior Secondary School in Solan district and interacted with the students of class IX there too.

Rajendra Vishwanath Arlekar reached the school around 11.00 a.m. today. He interacted with the students in the presence of the class teacher. He asked the children general questions related to their study habits. In the class of 41 students, most were apprised that they do not read general books except two or three students, the Governor expressed concern over the lack of interest in reading general books other than textbooks. The students knew the names of the heroes of the independence and freedom movement, but no one read their biography.

The Governor said that books are our true friends, thinkers and guides. If there were good books at home, the habit of reading would be developed. He said that parents often say that their children watch mobile and television, but how many parents bring good books for their children to read. The parents also have to choose the books. Most of the problems of the society were due to lack of reading habit, he added.

Rajendra Vishwanath Arlekar presented books of great men to all the 41 students of the class. He took an assurance from the students that they would read these books and after reading, would write a letter to him in 15 days as their response. He said that this is a little effort to encourage the students to read, which would be continued in future also.

Later, the Governor also interacted with the school staff and also planted saplings in the school premises.