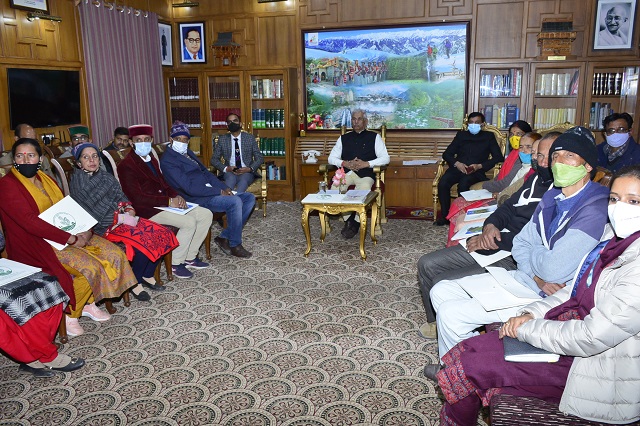 Governor Rajendra Vishwanath Arlekar joined in the concluding session of the the national conclave on natural farming organized at Gujarat’s Sardar Patel Auditorium, Amul, Anand through virtual medium from Raj Bhavan, Shimla on Thursday. The Conclave was addressed by Prime Minister Narendra Modi.

Progressive farmers of the state adopting natural farming were invited to the Raj Bhavan and also joined in the national conclave. These farmers also listened to the Prime Minister’s address with the Governor.

Governor said that Himachal Pradesh was moving ahead towards becoming a fully natural farming state. He advised that according to the call of Prime Minister, we should take a pledge that we would make natural farming a mass movement and added that in this Amrit Mahotsav, we would fulfill the goal of connecting at least one village of every panchayat with natural farming.

The Governor also interacted with the farmers and the farmers shared their experiences regarding natural farming.

Earlier, Priyatu Mandal, Secretary to Governor apprised the farmers about the program outline.

Rakesh Kanwar, Project Director, Subhash Palekar Natural Farming welcomed the Governor and apprised about the present status of the agro practice in Himachal Pradesh and made him aware of the various works being undertaken in this direction.