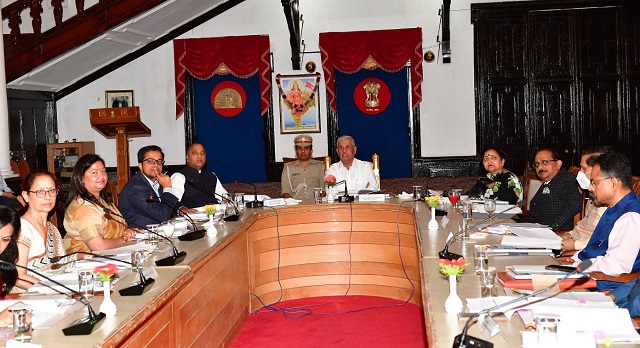 Governor Rajendra Vishwanath Arlekar, who is also the President of Himachal Pradesh Child Welfare Council (HP CWC) stressed upon the need to increase the sources of income of the Council. He also advised the council to actively involve life members in their activities.

The Governor was speaking at the Annual General Meeting of HP State Child Welfare Council held at Raj Bhavan, here today, in the presence of Chief Minister Jai Ram Thakur.

In his address, the Governor said that the Deputy Commissioners could cooperate at the field level to increase the resources and should be ensured from the temple income and Corporate Social Responsibility fund as well.  He said that the State Child Welfare Council should not be run as a department. He suggested that temple trusts, philanthropists along with affluent sections of the society should come forward towards charitable activities by helping the institutions with funds and resources. He directed officers to conduct regular inspections of all the ashrams. It should be taken as a social organization so that society could be involved in their activities, he added. He said that all the members of the council should work as volunteers. He also directed to organize meetings of the Council regularly.

The Governor said that other social organizations should also be associated with it so that collective work could be made with the spirit of service. He appreciated the efforts being made in this direction by the Deputy Commissioners and their team working at the field. He expressed hope that they would continue to carry forward the activities of the Council in similar manner in future as well. He expressed hope that the Council would soon move towards self-reliance.

Shri Arlekar said that equal opportunities should be made available to every child for optimum development of potential of children.  Children in the Ashrams should be provided all such modern facilities which are provided to other children at home. Helping these children would be the true service to humanity and religion.

Chief Minister Jai Ram Thakur while addressing the meeting said that efforts must be made to motivate the corporate sector to contribute as CSR for smooth functioning of the Council. He said that the corporate sector must also be motivated to contribute towards the projects being executed by the Council. He said that efforts must be laid to motivate the people to enroll themselves as life member of the Council, so that active participation of the people and general public must be ensured. He said that the membership for life member of the Parishad must be enhanced for existing Rs. 5,000 to Rs 11,000.

Chief Minister said that since being the ‘Dev Bhoomi’ generally the people of the State have a humane attitude and minimum cases were being reported of abandoning of parents and old people by the family members. He said that still there was a sizable number of old people in the old age homes run by the Department. He said that thus it was vital that greater stress must be laid on proper management of these old age homes and orphanages, so that the inmates do not face any inconvenience.

Social Justice and Empowerment Minister Sarveen Chaudhary while lauding the efforts of the Council said that the Department was sensitively dealing with the rights of the orphans, special child and old persons.  She said that still there was great scope of improvement.

General Secretary Child welfare Council Payal Behl Vaidya welcomed the Governor, Chief Minister and other dignitaries present of the occasion. She also conducted the proceedings of the meeting and detailed various activities being undertaken by the Council.