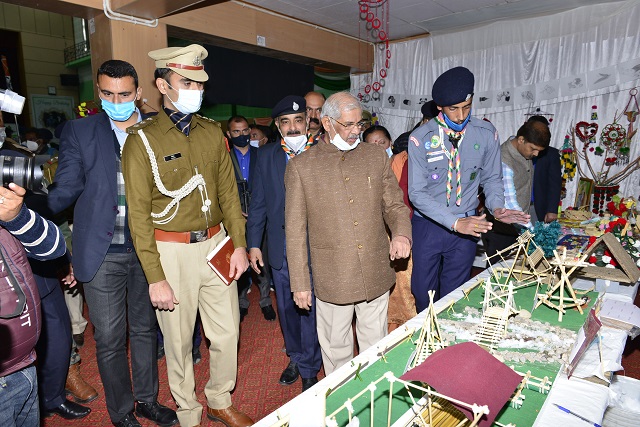 Governor Rajendra Vishwanath Arlekar said that discipline was an important part of life and dress code of Scouts and Guides inculcates this spirit. But, this feeling should be there at all times as it contributes to the society.

“Just by wearing the dress of scouts and guides, new thoughts develop along with the creation of a different idea, a disciplined society develops. Through this we can achieve a lot. How we deal with situations is determined by our disciplined life”, said Shri Arlekar. He said that he was also a member of Scouts and Guides during his school time. So, he better understands the importance of discipline in scouts.

He said that today the activities of Scouts and Guides have expanded rapidly in the country. We have been successful in connecting the youth to this organization, which was an achievement, he added. He said that he was confident that our young generation was capable of taking the country forward with dignity. He said that there was a need for ‘loud thinking’ today and there was a need to give specific goals to the youth, which we have to decide collectively. He added that our culture has considered the whole world as one.  The spirit of “Vasudhaiva Kutumbakam” was that the whole world was considered as one family, he added. He said that programmes should be organized to achieve this objective and India Scouts and Guides could contribute significantly in this direction.

The Governor said that on this day in 1857, the founder of Scouting, Lord Robert Baden Powell was born. Coincidentally, on this day in 1889, his wife and founder of Girl Guiding, Olive Baden Powell, was also born. This day is celebrated as World Scout Day and World Thinking Day. He said that the theme of this year’s Thinking Day was “Our World, Our Equal Future”, which means that the future of the whole world was the same, so there was a need to think for the security of the future.

The Governor gave away the prizes to the toppers of online skill development workshops and Scouts Fight Against Corona.

Earlier,  Dr. Amarjeet Kumar Sharma, State Chief Commissioner of BSGHP-cum-Director, Higher Education welcomed the Governor on the occasion and briefed various activities of the organization. He said that more than 40,000 volunteers of Scouts have registered in the State.

Rovers and Rangers of Government College Karsog performed skit and cultural programme was also performed by Cubs-Bulbuls of BL Central Public School, Kunihar on the occasion. The Governor also evinced keen interest in the exhibition put up by the Scouts and Guides.