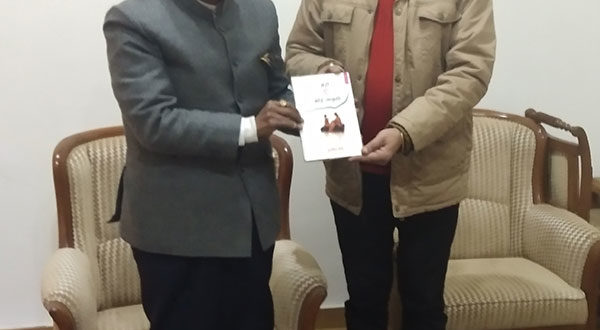 The collection of poems, which became part of the world book fair, has also been translated into German language.

The Governor congratulated Gurmeet Bedi for winning many awards at the national and international level and hoped that he would continue to enrich the literary world with his writing in future.  He said that literature was mirror of society and makes society sensitive and the state government is also committed for preservation and promotion of literature, art and culture.

There are 63 poems in this poetry collection of Gurmeet Bedi which have been published and discussed in renowned magazines of the country.  The country’s famous poet Padmasri Leeladhar Jagudi has written the prefase of this collection of poems.

Gurmeet Bedi has made a mark in the literary landscape of the country as a poet, storyteller, novelist, satirist and columnist and has given 9 books to the literary world in addition to 3 novels.  Recently his research book on astrology science has also been published. Gurmet Bedi is currently working as Deputy Director in the Press Liaison Office of Information and Public Relations Department, Chandigarh.

Previous: Education Minister stresses upon maintaining affordable fee structure in Sanik Schools
Next: Get together organised in honour of IAS Upma Chaudhry