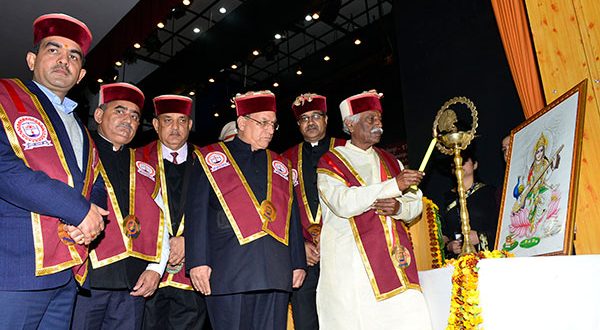 Like CSR, universities should also contribute towards Universities’ Social Responsibility

Governor Bandaru Dattatraya said that today in the age of competitive world economy, we should provide qualitative education to our graduates, which require best practices of world class educational management.

The Governor was presiding over 2nd convocation of Himachal Pradesh Technical University, Hamirpur, today. He awarded 269 medals and 243 degrees to the meritorious students of the university.

While congratulating the students, the Governor called upon them to utilize their education for the benefit of the country and the society and apply their knowledge of science and technology towards social change. He emphasized the need to connect between comprehensive free online courses and information technology enabled forums and teaching. He also stressed on including industry related subjects in the curriculum and said that demographic advantage could only be achieved when maximum youth were provided with best education, knowledge and skills. For this, universities should work on creative basis with modern technology, he added. 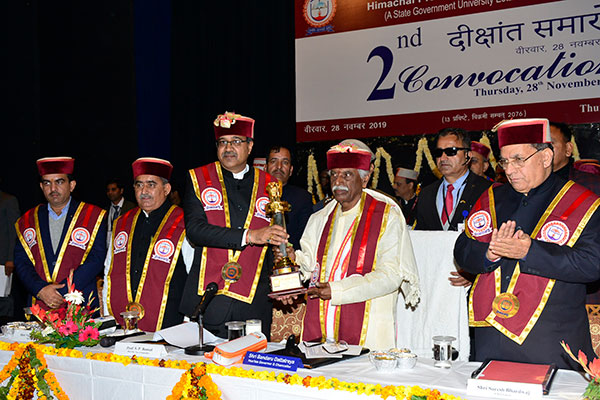 “At least five students from the university should visit the villages at an interval of about two months and communicate with the villagers about important schemes like cleanliness of the village, complete literacy”, he said.

He urged youth to avail benefits of schemes like Make-in-India, Start-up India and Mudra Yojana. He appealed the students to work on innovation and move towards entrepreneurship.

He congratulated the authorities for starting study bench in the university on the life of Father of the Nation Mahatma Gandhi and former Prime Minister Late Atal Bihari Vajpayee. 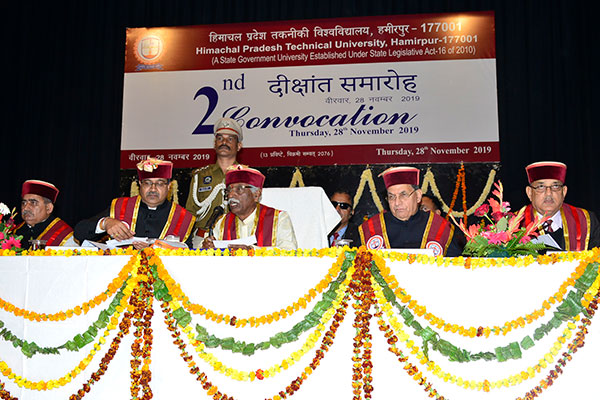 Education Minister Suresh Bhardwaj, in his key note address as Chief Guest, welcomed the Governor and said that education has great importance in our lives. He said that it was because of our intelligence that we were different from other living beings and added that intellect comes from knowledge and knowledge comes from education.  He said that we were focussed on the extension of education, but there was a need to make this education employment oriented. For this, value addition and skill development is required.

Bhardwaj said when Himachal came into existence, the literacy rate was only 10 percent, which has now risen to more than 90 percent excluding the migratory labour. He said that there were 139 colleges in the state and 18000 schools were functioning in the government sector.

Earlier, Vice Chancellor Prof. S.P. Bansal honoured and welcomed the Governor and detailed about the achievements and activities of the university. He said that it was perhaps the fifth university in the region which has started yoga and only university which has interlinked tree plantation with degree. He said that the university also developed skill basket and started 35 courses under this centre. He said that the government has focussed on starting need based courses so that students get placement immediately after completion of their degree.

MLA and Member of Board of Governor (BOG) Narinder Thakur welcomed the Governor and congratulated the medal and degree holders. He advised the students to work with positivity in life.

Registrar of the University Rakesh Kumar Sharma proposed vote of thanks.

MLA and BOG Member Arun Kumar and other prominent people were also present on the occasion.