Governor Bandaru Dattatraya said that the power of spirituality enhances the character as well as the personality and healthy society could be built only through character building.

The Governor was speaking as Chief Guest in the spiritual conference on a biennial function of ‘Prajapita Brahmakumari Ishwariya Sansthan’ at Sunni in district Shimla, today. He said, “We have to understand our ancient glorious culture. Our sages gave us the knowledge of yoga which is the art of living life. In ancient times, it was a major part of the lifestyle, but over time, we have forgotten our own glorious knowledge in the name of the ultra-modern”. He said that yoga has an important role in keeping the mind, intellect and body healthy. With the help of yoga, pure and powerful thoughts were developed in mind and when thoughts were superior, actions would be better, he added. 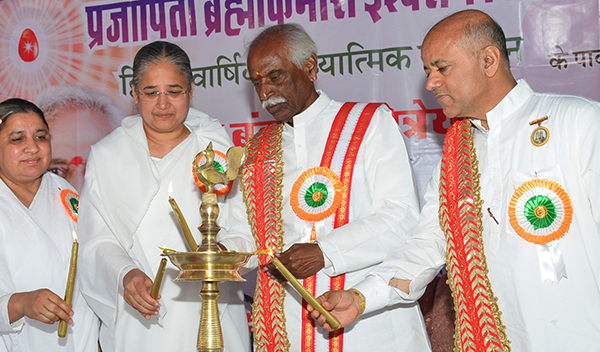 Governor said that the country was moving ahead on the path of development. India was the youngest nation in the world as the majority of the population was youth. He emphasised to provide creative direction to the youth. “I believe that when thoughts are positive, there can be no hindrance in the path of progress”. He said that ‘Prajapita Brahmakumari Ishwariya Sansthan’ was doing commendable work in social consciousness and development of the nation. He urged the Sansthan to contribute in making Himachal clean and plastic-free.

The Governor also honoured Brahmakumaris by giving them citations.

On this occasion, Brahmakumari Sister Anjali from Hyderabad welcomed the Governor and informed him about the activities of the Sansthan.

Brahmakumar Reva Das welcomed the Governor and the Senior Rajyogi of International Headquarters, Mount Abu, Prakash presented a vote of thanks.