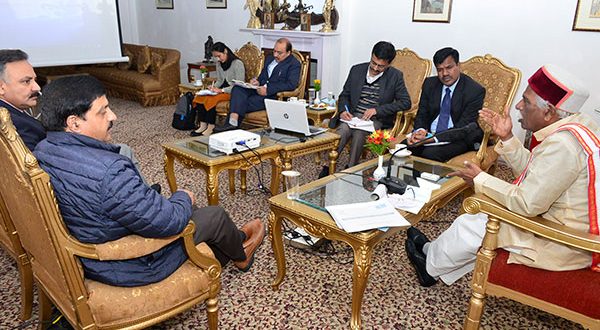 The Governor directed to work extensively for Shimla water management and sewerage system.  He said that to facilitate the population of about two lakh people of the city, there was a need to develop a comprehensive plan. He also asked to develop a plan for the construction of tunnels in Shimla town to decongest the pressure on roads.  He also stressed for smart classrooms and the development of tourist spots.

While giving detailed status of smart city Shimla, Pankaj Rai apprised the Governor that total 23 stakeholder departments were involved in respect of projects envisaged under Shimla Smart City Mission. He said that 28 most doable projects worth Rs. 339.35 crores had been prioritized. He also briefed about installation of e-toilets at important public places, construction of covered footpath along Sanjauli-IGMC and hospital,   eco-tourism development and parks and development of pedestrian paths including road widening, channelization of nallahs, procurement of garbage compactors and modern ambulances and hearse vans. He also detailed about solar panel on rain shelter at the Ridge, construction of the foot over bridges, lifts and escalators, provision of vending area, development of smart bus stops, ropeway project under PPP Mode and development of new smart parking etc. under the mission.

Pradeep Thakur gave power point presentation on smart city Dharamshala and apprised that 32 main projects and 74 sub projects were included in the plan costing Rs. 2109.69 crore. Under the projects, smart classrooms, underground dustbins, solar rooftops, state of art water treatment for potable tapped water, beautification and parkings were the main highlights among others.

The Governor appreciated the initiative taken by the Government in this direction and asked the officers to expedite the works.

Secretary to Governor Rakesh Kanwar was also present on the occasion.

Previous: 17 November declared paid holiday for Municipal Council elections
Next: Need to channelize youth energy to save them from drug trap: CS