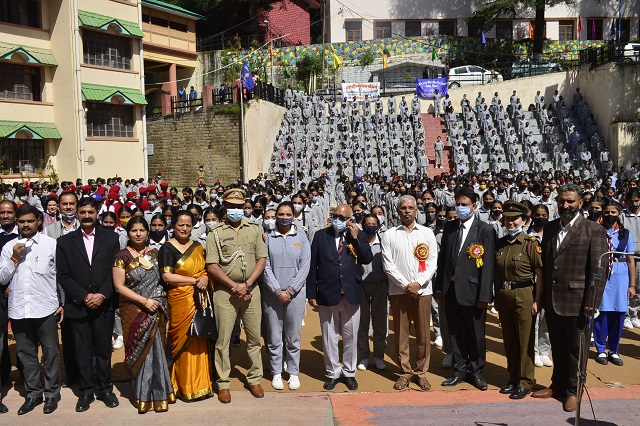 Governor Rajendra Vishwanath Arlekar today visited Government Senior Secondary School, Portmore, Shimla on the occasion of International Girl Child Day. On the occasion, he said the women have been given a high position in our culture and have accepted our country as ‘mother’.

Calling the girl students as ‘Shakti Swaroop’, Shri Arlekar said there was a need to contemplate on why the world needs to celebrate this day. Referring to Sahana Singh’s book ‘Education Heritage in Ancient India’, he said equal rights were given to women in India’s high tradition. Rather, women used to do the work of teaching in the universities of Nalanda and Taxila. He said that during the medieval period discrimination against women started increasing in the society.

He said that Macaulay wrote books accordingly, with the aim of destroying a particular culture. In these, an attempt was made to tell that there was no provision of education for women in our culture, he added and said that this notion was totally wrong.

Our culture has called women by many names. It is in our culture to make special provisions for them, so the world cannot teach us about it. There is a need to change social perceptions, said the Governor.

Joint Director, Higher Education Ashit Kumar welcomed the Governor and said that 78,480 girl students were getting education at the senior secondary level in the state. He said that there were more than 60 percent girl students in the higher educational institutions which reflect the attention being given to the education of girls in the state.

Principal, Portmore School, Narendra Sood honoured the Governor and expressed his gratitude for visiting the school.

On the occasion, the students also presented a colourful cultural program.

Additional Director, Women and Child Development Department Ekta Kapta and other officers were also present on the occasion.