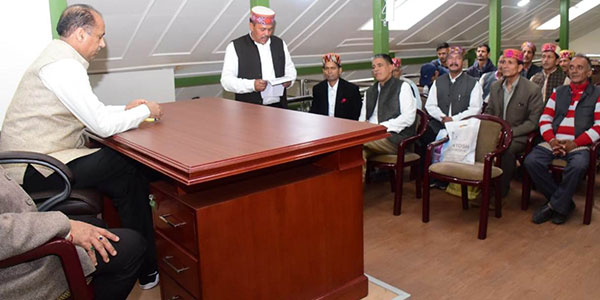 The state government is committed to preserve the Dev Sanskriti of the State and would provide all possible help to those involved in promoting the same in the state. This was stated by the Chief Minister Jai Ram Thakur while addressing the Kullu Zila Kardar Sangh, here today.

The Chief Minister said that Himachal Pradesh was known as the ‘Dev Bhoomi’ and the people of the State have great faith in Gods and Goddesses. The state government was ensuring that the ancient tradition was kept alive for the generations to come. He said that the State Government has also decided that Dev Dhun would be played during international Kullu Dussehra festival this year, in which over 2000 local musicians would participate.

Jai Ram Thakur assured the Sangh for sympathetic consideration of their demands.

Transport and Forests Minister Govind Thakur and other members of the Kardar Sangh were present on the occasion among others.