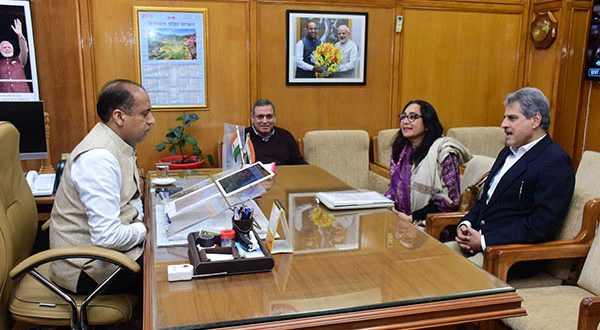 The State Government was committed to showcase the rich cultural, social and tourism potential of the State through various means of communication. This was stated by Chief Minister Jai Ram Thakur while interacting with noted film producer Varsha Bedi and Arjuna Awardee and Chief Executive Officer of Content Flow Films and Web Series Pvt. Ltd.  Moraad Ali Khan, who called on him here, today.

The Chief Minister informed that the State Government was committed to provide all possible help to the film producers willing to highlight natural bounty of Himachal Pradesh through films. He said that the films can go a long way in enhancing the image of tourist destinations by motivating the people to visit these places.  He said that films and television have become a catalyst for tourism as publicity and promotion media helps in attracting tourists. He said that films also help in motivating the tourists in their travel destination selection.

Varsha Bedi also showed the promo of her film ‘Khanaur’ (Bitter Chestnut) to the Chief Minister which would be premiere in Busan International Film Festival on 3-12 October, 2019. She said that the film has been shot in Bir, Barot and Baragraan regions of Himachal Pradesh based on the living style of people of these areas.

Principal Secretary to Chief Minister Sanjay Kundu was also present on the occasion.