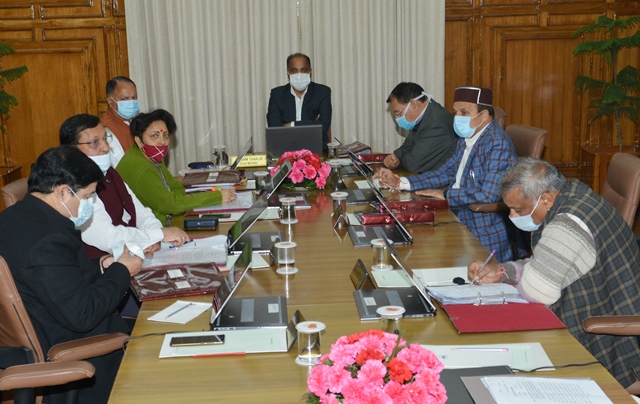 The Meeting of State Cabinet held here today under the chairmanship of Chief Minister Jai Ram Thakur reviewed the Covid-19 situation in the State. While expressing concern over the sharp surge in Covid-19 cases in the State, the Cabinet decided to close all educational institutions including teaching and non-teaching staff, except those required for exam duties till 21st of this Month.

The Cabinet decided to fill up 25 posts of Agriculture Development Officers on contract basis in Agriculture Department through HP Public Service Commission against direct recruitment quota.

It decided to implement central sector scheme SVAMITVA in the state for surveying the land parcels in rural inhabited areas using Drone technology. For this, Revenue Department would be designated as the Nodal department for implementation of the scheme with the support of Panchayati Raj Department. For this, MoU would be signed with Survey of India for starting the scheme in the State. A State Steering Committee, State Project Management Unit and District Project Monitoring Unit would also be constituted for effective implementation of the scheme.

It also gave its consent that the project for development of multi storey parking-cum-shopping complex at U-Block Mandi may be awarded under PPP mode to highest bidder at an annual concession fee of Rs. 63,63,000 plus GST and all other applicable taxes per annum, as per terms and conditions of RFP. The selected bidder would also pay upfront premium of Rs. 2 crore to the authority by way of five equal instalments of Rs. 40 lakh each over a period of 24 months starting from the compliance date.

The cabinet also gave its nod to upgrade Primary Health Centre Tiyara in Kangra Vidhan Sabha area in Kangra district to Community Health Centre alongwith creation and filling up of 13 new posts of different categories to man this institution.

Presentations were also made before the Cabinet by Jal Shakti Department on prevailing drought situation in the State. It was decided to hold a review meeting under the chairmanship of Chief Minister including all the stakeholders departments for further decisions.

The Cabinet also decided that next Jan Manch would be held on 25th of April this year.