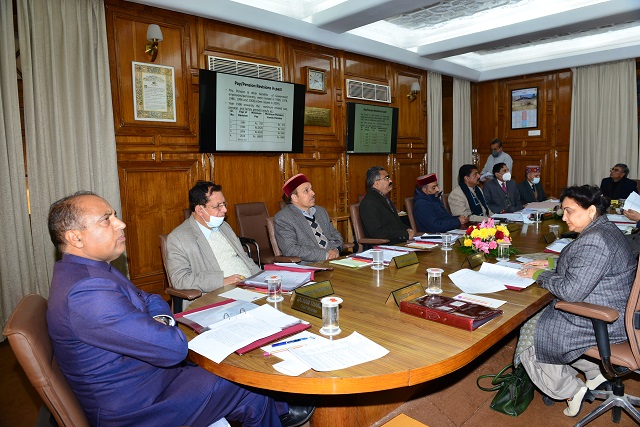 The Meeting of State Cabinet was held here today which was presided over by the Chief Minister Jai Ram Thakur decided to provide revised pay scales to about 2 lakh employees of the State Government from 1st January, 2016. The employees would get salary of January, 2022 payable in February, 2022 in revised pay scale. This would put an additional burden of about Rs. 4000 crore annually on the state exchequer. The State Government has already provided interim relief of about Rs. 5000 crore to the employees as part of the arrears. After the revised pay scales due to higher fixation about 1,05,000 NPS employees, Rs. 260 crore would be spent as government contribution as 6 years arrears under NPS. Decision was also taken to increase the salary of contract employees.

It gave its nod to promulgate Himachal Pradesh Swarn Jayanti (Legacy Cases Resolution) Scheme, 2021 for settlement of arrears of tax, fee, interest, penalty etc. which are pending for recovery or are pending in the appellate forums or may accrue in future as a result of disposal of pending tax assessment under the various enactments. This would also address the tax dues which are trapped in the cases that have not been assessed so far as well as those cases where arrears have been declared under the Himachal Pradesh Land Revenue Act, 1954. This would help in redressal of over 1.68 lakh cases.

The Cabinet decided to upgrade Ayurvedic Health Centre at Bassi in Shri Naina Devi Ji Vidhan Sabha area to 15 bedded Ayurvedic Hospital alongwith creation and filling up of 12 posts of different categories to man this Hospital.

The Cabinet gave its approval for creation of new Patwar Circle Tharu in Nagrota Bagwan area of Kangra district to the facilitate the people of the area.

The Cabinet also accorded its approval for creation of New Sub Division (Civil) at Kupvi in Chopal assembly constituency of Shimla district.

It gave its approval for filling up of three posts of Inspector in Food, Civil Supplies and Consumer Affairs Department on contract basis through direct recruitment.

The Cabinet decided to start science classes in Government Senior Secondary Schools, Sianji, Baggi, Nagwain, Seri Kothi and Talyar in Mandi district to facilitate the students of these schools.

It also decided to upgrade Government Primary Schools, Manjhas in Sundernagar, Kau in Seraj-II, Jamho Jallon, Timbru and Nalani in Sundernagar and Mashog in Karsog area of Mandi district to Government Middle Schools alongwith creation and filling up of 18 posts of different categories.

It also decided to open Primary Health Centre at Jagat in Chamba district to facilitate the people.

It also gave its nod to issue Letter of Intent in favour of M/s Mayur Industries Village Neri in Sundernagar tehsil of Mandi district for setting up of fruit based wine and cider factory.

The Cabinet gave its consent to the draft of ‘Swarn Jayanti Gram Swarojgar (Parivahan) Yojna to allow unemployed youth to ply 18 seater vehicles on these routes at concessional tax rates. This scheme would provide mobility to rural areas and will also provide employment to rural youth.

It also decided to open new Sub Tehsil at Dhalwan under Baldwara tehsil of Mandi district alongwith creation and filling up of 12 posts of different categories.

The Cabinet gave its consent to create six new patwar circles in Manali tehsil of Kullu district by reorganizing the existing patwar circles.

It also gave its nod to transfer 0-76-79 hectares of land at Mohal and Mauza Palauhra in Jawali tehsil of Kangra district in favour of Ministry of Defence Government of India for construction of ECHS Polyclinic at free of cost by charging Rs.1 as token value of land.

It also provided its in principle approval for establishing Drone Flying Training School at Government ITI Shahpur in Kangra district and authorized the Department of Technical Education to finalize the terms of engagement with Indira Gandhi Rashtrtiya Uran Akademi for signing the MoU.

It also decided to upgradation of Primary Health Centre at Loharghat in Solan district to Community Health Centre alongwith creation of different categories for this health institution.

It gave its nod to set up a separate Kidney/Renal Transplantation Cell under the Department of General Surgery at Dr. Rajendra Prasad Government Medical College Tanda in Kangra district alongwith creation of requisite posts.

The Cabinet gave its approval to create and fill up several posts of different categories in Trauma Centre at Shri Lal Bahadur Shastri Government Medical College and Hospital Ner Chowk in Mandi district.

Presentation was also made before the Cabinet on Covid-19 situation in the State and preparedness to tackle the speculated third wave of corona virus.