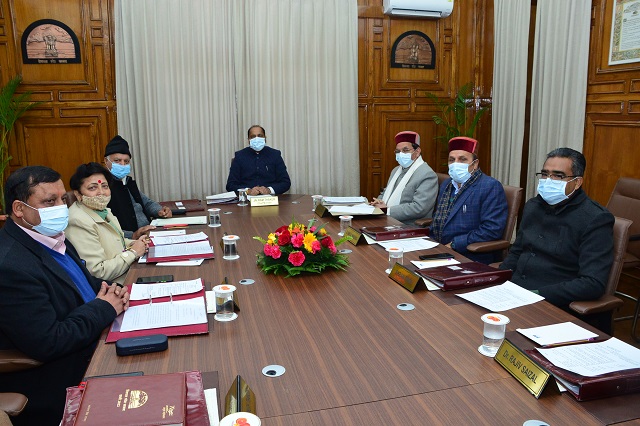 The meeting of State Cabinet held here today under the chairmanship of Chief Minister Jai Ram Thakur decided to recommend to the Governor to convene the budget session of H.P. Vidhan Sabha from 23rd February to 15th March, 2022. It will have a total 16 sittings. The budget for the financial year 2022-23 will be presented on 4th March, 2022.

The Cabinet decided that all summer closing educational institutions from 9th to 12th standard would open from 3rd February, 2022, alongwith all other higher educational institutions. It also decided that all the coaching institutions and libraries would also remain open from 3rd February. All Government offices would remain open, as usual for six days in a week with 100 percent capacity. However, handicapped persons and pregnant women would still continue to work from home. It was also decided that all the gyms and clubs would be opened. It was also decided that all social gatherings would be allowed with maximum 500 outdoor and 250 indoor with 50 percent of the capacity, subject to adherence of the Covid-19 safety protocols and covid appropriate behaviour. Night curfew would remain in force as usual from 10 pm to 6 am and shops will open and close on normal times and langar would remain suspended till further orders.

It also gave its approval to engage M/s Krsnaa Diagnostic Private Ltd. Pune, the successful L-1 bidder offering maximum discount of 40.50% on  IGMC-RKS/CGHS rates for providing diagnostic services upto the CHC level  as per HUB and SPOKE Model for 236 tests including 53 free tests through open bid tender. Till now Laboratory services in the State were being  provided at 24 health institutions only and this decision would facilitate the patients in getting diagnostic facilities at their door steps.

The Cabinet decided to make partial amendment in its decision regarding opening new Division of Himachal Pradesh Public Works Department at Shahpur in Kangra on 14th January, 2022 by including three sections viz. Chairi, Gaggal and Rajaul under Sub Division Gaggal to facilitate the people of the area.

The Cabinet gave its approval to open office of Horticulture Development Officer in Development Block Balichowki in Mandi district alongwith creation and filling up of four posts.

The Cabinet decided to enhance the annual income limit for availing benefits of various pension schemes started by the Social Justice and Empowerment Department from existing Rs. 35000 to Rs. 50000 per annum. This would benefit about 78158 additional beneficiaries under various schemes.