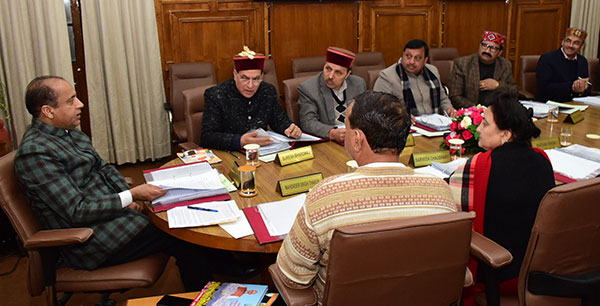 The State Cabinet meeting held here today   thanked the Union Home Minister Amit Shah, National BJP Working President J.P. Nadda and Union Minister of State for Finance and Corporate Affairs Anurag Thakur for gracing the function held at Shimla to celebrate completion of two years tenure of the present State Government. The Cabinet also thanked the people of the State for their wholehearted support and cooperation to the State Government.

Keeping in view the vulnerability of the State to multiple natural and man induced hazards, the Cabinet decided to constitute State Disaster Response Force (SDRF) consisting of three companies. This would facilitate the State Government to pre-position its resources and mobilize them within shortest possible time in case of natural calamities. In addition to this SDRF can also be utilized during Manimahesh Yatra, Shrikhand Yatra, Kinnar Kailash Yatra and other events where preventive measures are required.

It also gave its consent to provide free text books to all the students of 9th and 10th standards of general category studying in government schools.

The Cabinet gave its consent to enhance the financial assistance being given to the eligible families under Pradhan Mantri Awas Yojna–Gramin and Mukhya Mantri Awas Yojna by Rs. 20,000. Now the beneficiaries will be getting Rs. 1.50 lakh instead of Rs. 1.30 lakh.  Similarly, it also decided to increase the amount under Mukhya Mantri Awas Murammat Yojna from existing Rs. 25,000 to Rs. 35000.

It gave its approval to link 10 market yards with e-NAM (Electronic National Agriculture Market) to ensure remunerative prices to the farmers of their produce. With this, 29 market yards (Subzi Mandi) have been linked with this facility. This would provide the farmers a common online market platform for sale of their produce besides providing them better price through transparent auction process alongwith timely online payment.

The Cabinet gave its approval to fill up 174 posts of different categories in Police Department for smooth functioning of the department.

It decided to create and fill up seven posts of different categories for Tertiary Cancer Care Centre in the department of Radiotherapy at Shri Lal Bahadur Shastri Government Medical College Ner Chowk in Mandi district.

The Cabinet decided to fill up one of post of Radiation Safety Officer and two posts of Medical physicist in IGMC, Shimla through direct recruitment.

The Cabinet approved upgradation of  Community Health Centre Nagwain in Mandi district to 50 bedded Civil Hospital alongwith creation and filling up of 19 posts of different categories to manage this civil hospital.

In order to ensure smooth functioning of the Excise and Taxation Department and provide adequate staff for e-way bills verification, recovery of registration verification and distillery duties and excise duty and others related works, the Cabinet decided to fill up 50 posts of Excise and Taxation Inspectors in the department through direct recruitment.

It decided to fill up 25 posts Junior Office Assistant (IT) in the Deputy Commissioner office Shimla on contract basis.

In order to promote safe and secure adventure sports and to make aero sports activities more safe and professional, the State Cabinet gave its approval to Himachal Pradesh Aero Sports Rules, 2019. This would cover various activities such as paragliding, handgliding and paramotor etc.

It decided to open new police post at Sarali at Chhayod khad under Police Station Arki in Solan district alongwith creation of 13 posts of different categories to man this Police Station.

The Cabinet gave its approval to fill up five posts of process engineers in Irrigation and Public Health Department on contract basis through direct recruitment.

The Cabinet decided to open new District Tourism Development Office at Chamba and ADTO in three districts alongwith creation and filling up of 23 posts of various categories in Tourism Department. 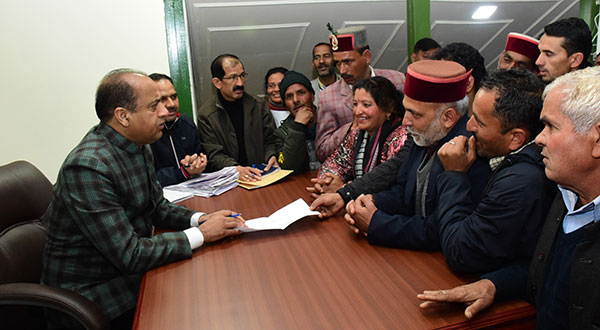 It decided to upgrade veterinary dispensaries Sajao Piplu in Dharampur area, Bagsiad of Seraj area, Gumma in Jogindernagar area of Mandi district and Bhalta Machchher and Nainatikkar in Pachhad of Sirmaur district to veterinary hospitals alongwith creation and filling up of 21 posts of different categories to man these hospitals.

The Cabinet also lauded the services of Chief Secretary Dr. Shrikant Baldi provided to the State during his illustrious career of over 34 years. Dr. Baldi served the State in various positions of the State Government is retiring on 31st of this month as Chief Secretary.