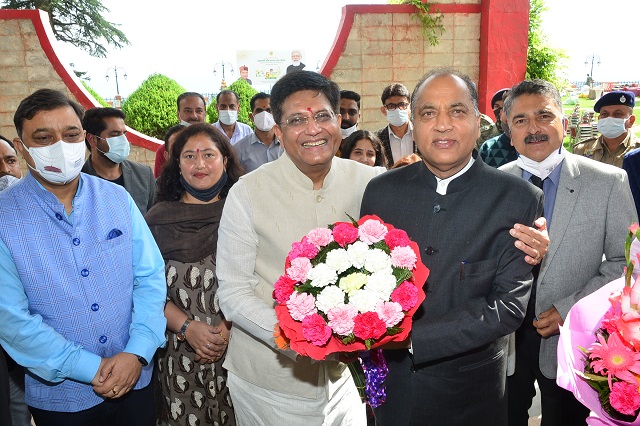 Union Minister for Consumer Affairs, Food and Public Distribution, Commerce and Industries Piyush Goyal has appreciated the achievements of the Himachal Pradesh Government in becoming first State of the Country in providing cent-percent first dose of Covid-19 vaccination to the eligible age groups besides ensuring food safety to the targeted groups. He was addressing Sewa Aur Samarpan Abhiyan at Totu-Jutogh in Shimla here today.

The Union Minister said that the State Government has made tremendous progress in all spheres of development during the last fifty years after attaining the status of statehood. He said that the State had not only emerged as role model for hill States of the country but also shown path for others big States.

While congratulating the Chief Minister and people of the State on the golden jubilee year of Statehood, Piyush Goyal said that the State during about four years has achieved various milestones under the able leadership of Chief Minister Jai Ram Thakur. He said that the Nation was fortunate that it was being headed by a strong and dynamic leadership in form of Prime Minister Narendra Modi. He said that during last 20 years as Chief Minister of Gujarat and thereafter Prime Minister of the country, Narendra Modi has worked tirelessly and relentlessly without taking even one day break.

Chief Minister Jai Ram Thakur while welcoming the Union Minister said that the Sewa Aur Samarpan Abhiyan was being launched throughout the country to celebrate two decades of Prime Minister in public services. He said that the birthday of Prime Minister on 17th September was celebrated as Sewa Divas throughout the country and various welfare activities were being organized to mark the occasion.

Union Minister and Chief Minister also visited vaccination centre Totu and interacted with the doctors, paramedical staff and the people who came for vaccination.