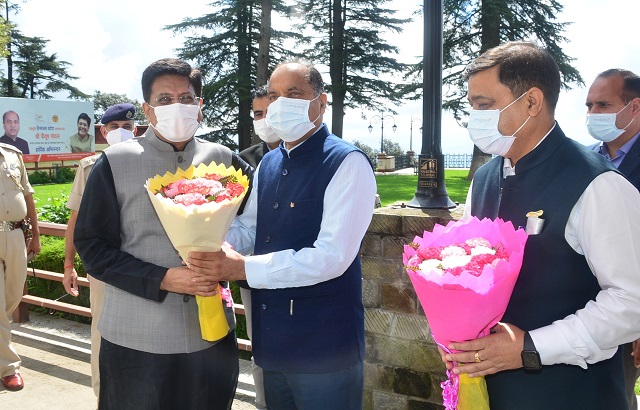 Himachal Pradesh made progress in all spheres of development: Piyush Goyal

Union Minister for Consumer Affairs, Food and Public Distribution Piyush Goyal presided over the State Level Function of Pradhan Mantri Garib Kalyan Ann Yojna here today. While interacting with beneficiaries of this Yojana virtually from Shimla he said that the State of Himachal Pradesh has made tremendous progress in all spheres of development during its fifty years of Statehood. He said that not only the State has pioneered in various sectors, but also shown a way for other States of the country. He said that Prime Minister Narendra Modi has completed continuous twenty years in public service as Chief Minister of Gujarat and thereafter as Prime Minister of the country. He said that these years have been dedicated for upliftment of the poor and the downtrodden and making India a strong and vibrant Nation amongst the comity of the nations.

He also congratulated the State on the auspicious occasion of Golden Jubilee of Statehood and for achieving   the target of cent per cent first dose vaccination of eligible groups.

While interacting with the beneficiaries of Pradhan Mantri Garib Kalyan Anna Yojana in the State, Union Minister  enquired about their views regarding this scheme.   He interacted with Guddi Devi from Kangra, Nisha Devi from Dogra Kawar in Shimla district, Usha Devi from Chamba, Saroj Kumari from Hamirpur and Chudamani from Mandi, Kishana Devi from Bilaspur. 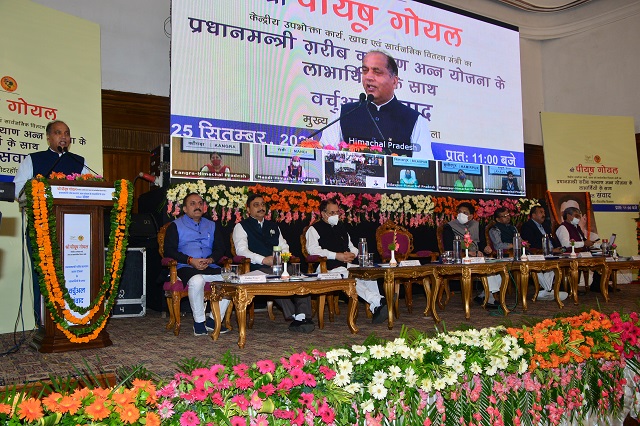 Chief Minister Jai Ram Thakur said that under the Pradhan Mantri Garib Kalyan Anna Yojana, an ambitious scheme launched by the Central Government has been ensuring food security to the people during the Covid pandemic, food grains worth Rs 643 crore have been distributed for free to the families in the State. He said that Pradhan Mantri Garib Kalyan Anna Yojna was a big initiative by the Prime Minister Narendra Modi aimed at providing food security to the poor, migrant labourers and unemployed in the challenging times of Covid-19. He said that about 80 crore population of the country was benefitted under this scheme. He said that more than 7 lakh ration card holders were being covered under the National Food Security Act, thereby covering more than 29 lakh population under this scheme. He said that a total of more than 12 lakh APL ration card holders were also being benefitted under this scheme, thereby covering a population of more than 44 lakhs in the State. He said that under the scheme, 69,000 MT of rice and 42,000 MT of wheat were distributed for free allocation in the year 2020-21 in the state.  In addition, more than 5000 MT of black gram were also allotted to the NFSA families, he added.

Jai Ram Thakur said that the State was fortunate to have benevolence of Prime Minister Narendra Modi. He said that despite a small hilly state, Himachal Pradesh has ensured that all the eligible families get access to subsidized ration. He said that Mukhyamantri Grihini Suvidha Yojna and Mukhyamantri HIMCARE has ensured coverage to the left out beneficiaries of Ujjwala Yojana and Ayushman Bharat Yojna launched by the Union Government.

Chief Minister said that in order to provide relief to the poor section of the society in view of the economic instability in the country due to Covid-19, the Government of India again provided 5 kg of food grains per person per month free of cost under NFSA.  He said that this scheme was implemented by May 2021 and initially it was till June 2021, but thereafter the Pradhan Mantri Garib Kalyan Anna Yojana was extended by the Government of India for the next 5 months from July to November, 2021.  He said that food grains worth more than Rs. 366 crore have been distributed to the state in the year 2020-21 whereas, for the year 2021-22, food grains worth about Rs. 277 crore have been distributed to the State. He said that the State Government had been providing additional subsidy on edible oil to provide relief to the consumers. He said that Himachal was probably the first State to implement ‘One Nation One Ration Card scheme. He thanked the Prime Minister for starting this welfare scheme, which has proved a boon to the people of the State during the hard times of Covid pandemic as no one faced the problem of food shortage in the State.

Chief Minister said that today was also the birth anniversary of Pandit Deen Dayal Upadhyaya, who gave the concept of Antyodaya and it was a relevant day to take forward his message.  He congratulated all the people involved in the operation of this scheme in the state.

Ration bags were also being provided to a few beneficiaries on the occasion.

Secretary Union Ministry of Food and Public Distribution Sudhanshu Pandey said that this was an historic day for the people of the State as the State was celebrating its Golden Jubilee year, that such event was being organised in this State in which over one lakh people were  connected actually as well as virtually. He said that the Union Government was striving to increase the storage capacity of food grains in the State to ensure easy availability of food grains to the people.

Secretary Food and Civil Supplies C. Paulrasu welcomed the Union Minister, Chief Minister and other dignitaries present on the occasion.