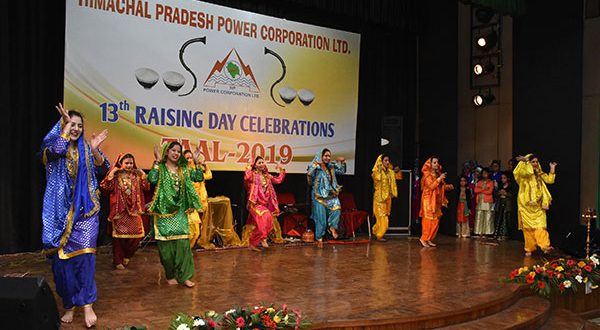 Flag of HPPCL was unfurled at its Corporate office by Sh. Manmohan Sharma, Director (Personnel & Finance).

Sh. Devesh Kumar said that HPPCL has made another significant contribution to the State by dedicating 5 MW Berra Dol Solar Power Plant on 20th February 2019 to the people of State. This Solar power plant is first commercial Solar Project of Sate developed by any State Govt. organization.

He said that HPPCL will start generation from its 111 MW Sawra Kuddu Hydro Electric Project in this Financial Year.

He elaborated that long pending issues in Kashang Stage-II and Stage-III hydro electric project has been solved and the survey works of the project has been completed. We have started the construction work of link road to intake site. He said that issues of forest clearance of Deothal Chanju and Chanju-III has also been solved and the construction of these AFD funded projects will also begin in next financial year.

The works of 450 MW Shongtong Karchham project are also going smoothly and soon the funding issues for the construction of this project will be resolved.  Congratulating HPPCL employees on its 13th Raising Day, he appealed to work with dedication and utmost sincerity to complete the allotted projects within time frame.

The cultural function for the employees and their families was organized at CPRI auditorium where the cultural presentation by HPPCL employees and their children enthralled the audience with Himachali folk songs and other melodies. The winners of the 13th HPPCL Sports event were also felicitated on the occasion.