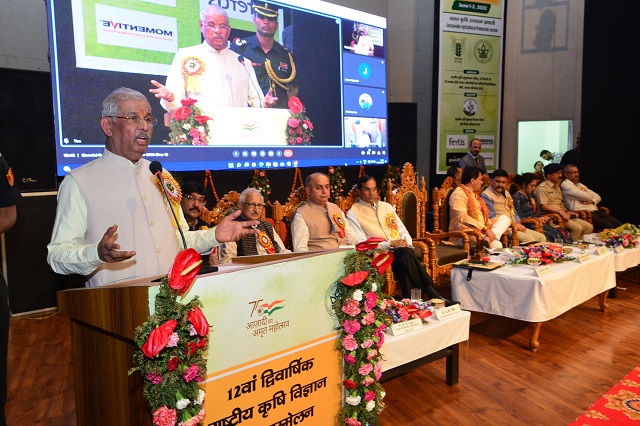 Governor presided over closing ceremony of the National KVK Conference

“Himachal is moving towards becoming a natural farming State. Therefore, Devbhoomi should be the ‘Land of Motivation’ for other states of the country and it should play the role of a major center in the matter of natural farming for all Krishi Vigyan Kendras across the country”, said Rajendra Vishwanath Arlekar, Governor of Himachal Pradesh.

He was presiding over the valedictory function of the two-day 12th Biennial National Krishi Vigyan Kendra Conference organized under the aegis of Dr. Yashwant Singh Parmar University of Horticulture and Forestry and Indian Council of Agricultural Research, New Delhi at Nauni University, Solan today.

He said that the Indian economy has always been based on agriculture but unfortunately, the direction of this economy began to be developed on foreign models. The understanding of the subject was in us, it started changing and the Institutions which were responsible for adopting our own thoughts were also influenced by the western thoughts, he added. Expressing contentment, he said that in the last few years this thinking has started changing which also brings drastic change in the agriculture sector as well.

Rajendra Vishwanath Arlekar said that since we were following the western model, the productivity of land in agriculture has decreased rapidly. He added that its solution lies in our traditional agriculture.

“We have never been against nature. The Indian way of life was associated with nature and nature was associated with agriculture”, he said and added that since the adoption of this farming method in Himachal Pradesh has brought good results and the practice was expanding rapidly. He said that the farmers have told him their experiences. By adopting this method, the cost was reduced by 27 per cent and production was increased by about 56 per cent, he added. He said that scientists could make this farming method successful, due to which the Prime Minister’s resolve to double the farmers’ income would also be fulfilled.

Purushottam Rupala, Union Minister for Fisheries, Animal Husbandry and Dairying, while addressing the Conference virtually said that the role of Krishi Vigyan Kendras was important in technological expansion in the agriculture sector. He said that these centers could prove to be helpful in taking nanotechnology to the farmers. Nano Urea could be promoted through these centers so that there was no need to import it from abroad. He said that we could also demonstrate drone technology through Krishi Vigyan Kendras.

On the occasion, Kailash Choudhary, Union Minister of State for Agriculture said that the Government was taking effective steps to promote agriculture and to double the income of farmers. He said that farmers were excited to adopt natural farming and this farming method was proving helpful in bringing back the youth who were leaving farming practice. He said that this farming practice would also be successful only with the determination of the scientists. He said that we have to take the farmers out of chemical farming and promote natural farming in the country.

Dr. Trilochan Mohapatra, Director General, ICR said that ICR is moving fast towards making farmers self-reliant. He said that today imports have come down in the agriculture sector and productivity has increased. He said that Krishi Vigyan Kendras were working to double the income of the farmers. With better use of technology, we could achieve this goal. He said that ‘sustainable farming’ should be done for future security.