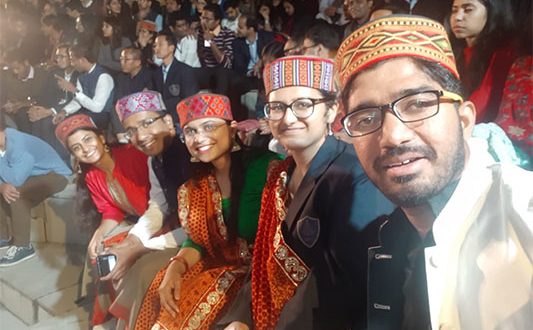 Himachal State Day, a cultural bonanza showcasing rich Himachali culture was organised at Lal Bahadur Shastri National Academy of Administration (LBSNAA) at Mussouri last evening. Such an event was held for the first time in the Academy.

Vivek Mahajan Deputy Resident Commissioner Government of Himachal Pradesh at Delhi informed that RC office under the able guidance of Sanjay Kundu Principal Resident Commissioner, Government of Himachal Pradesh had coordinated with the Lal Bahadur Shastri Academy Mussourie and various departments of the state government to hold the event successfully. Brochures and publicity material related to tourism, industry and films from tourism department were exhibited in the event besides handicrafts of the state which was widely appreciated. He hoped that all the trainee officers would acquaint their respective states about rich culture, heritage, crafts, etc of Himachal Pradesh and would act as brand ambassadors of Himachal Pradesh in their respective districts across the country in promoting the hill state Himachal Pradesh which is on the rise under the dynamic leadership of Chief Minister Jai Ram Thakur.

Dr. Sanjeev Chopra Director of the Academy, staff and officer trainees greatly appreciated the efforts of state government and said that such kind of events by respective states will go a long way in introducing rich heritage of the country to the officers trainees under one roof of LBSNAA.