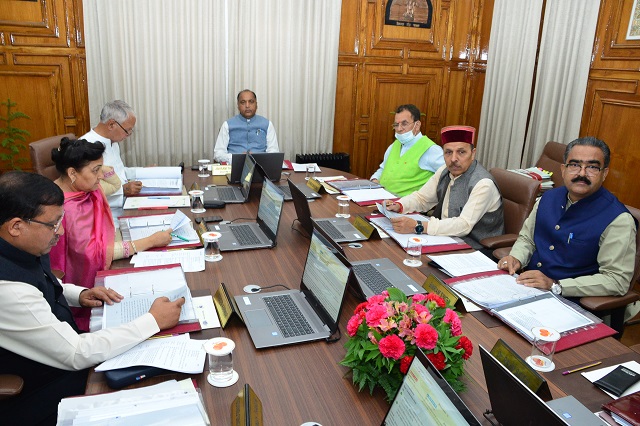 The Cabinet gave its approval to the Development Plan for Shimla Planning Area after over 43 years, as till now interim developmental plan was inforce.

The Cabinet decided to create a Sub Division of Public Works Department at Jainagar in district Solan alongwith creation and filling up of six posts of different categories.

It also decided to open a new Section of Public Works Department at Balgar in district Shimla.

The Cabinet decided to relax the condition of possession of atleast 5 kanal agricultural land for registering the tractors purchased for agriculture purposes under Custom Hiring Centre Scheme under the centrally sponsored Sub Mission on Agriculture Mechanization.

The Cabinet gave its approval to the proposal to amend the Development Plan for Solan plan area.

The Cabinet gave its nod to open Health Sub Centre at Bakhali in Gram Panchayat Tandi in Mandi district to facilitate the people of the area.

The Cabinet gave its approval to increase the monthly stipend of PG students of Rajiv Gandhi Government Ayurvedic Post Graduate College Paprola by Rs. 8000 per month from April, 2022.

It also gave its approval to open new Ayurvedic Health Centre at village Kandobayla in Dadahu tehsil of Renukaji Vidhan Sabha Area in Sirmaur district alongwith creation and filling up of 3 posts of different categories.

The Cabinet gave its approval for promulgation of Himachal Pradesh Payment of Income Tax on Salaries and Allowances of Certain Categories Ordinance, 2022 from the current financial year.  Now the Income Tax shall be paid by the individual members i.e. Chief Minister, Ministers, Speaker, Deputy Speaker and MLAs.

It also gave its ex post facto approval for premium rates of Rs. 1000 or Rs. 365 for three years under Mukhya Mantri HIMCARE Yojna and also enhancing its validity period for three years. It also decided that registration of new cards under this scheme would be carried out throughout the year.