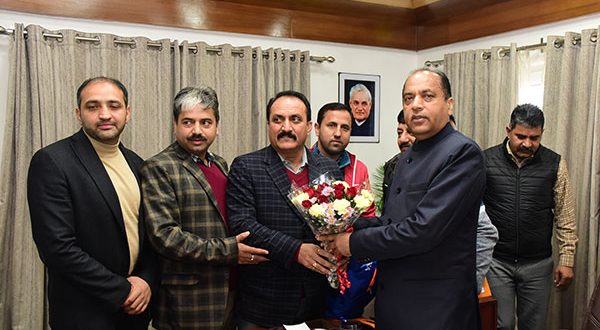 Members of Himachal Pradesh Sports and Anti-Drug  Association (HPSADA) led by its President Baldev Singh Tomar called on Chief Minister Jai Ram Thakur here today and handed over him the invitation of cricket tournament being organized by the Association on 16th  and 17th  November, 2019 at BCS Ground, Shimla.

Chief Minister also unveiled the dress of the tournament on the occasion and appreciated the efforts of the Association for organising such tournament and said that such types of tournament played important role in creation of awareness amongst masses especially youth about the fitness as well as keeping the youth from social evils and drug menace.

Previous: Need to channelize youth energy to save them from drug trap: CS
Next: Students of Indian origin from nine countries call on Governor