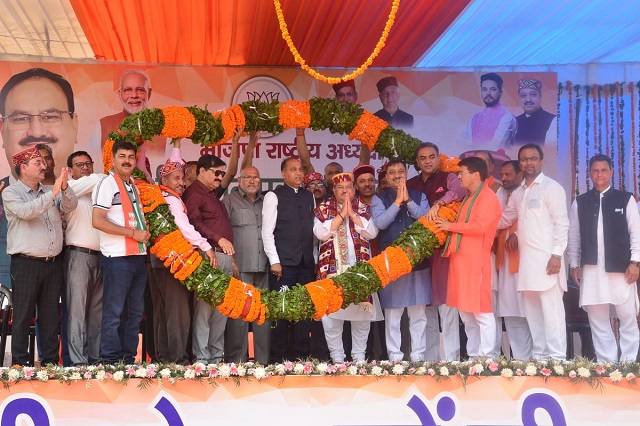 Himachal Pradesh has made unparallel development during the last four and a half years under the leadership of Chief Minister Jai Ram Thakur and all this was possible due to the double engine governments at the Centre and the State. This was stated by the MP and National BJP President Jagat Prakash Nadda while addressing the largely attended ‘Samman Samaroh’ organized at ‘Rath Ground’ in Kullu district, today in his honour, after the landslide victory of BJP in four states of the country in the recently concluded Vidhan Sabha elections of these states.

While thanking the people of Kullu for according him rousing welcome, Jagat Prakash Nadda said that Kullu district was a Dev Bhoomi, where almost every village in the district has its own deity. He said that the enthusiasm of the people of Kullu indicates that the BJP would once again form the Government in the State under the leadership of Chief Minister Jai Ram Thakur. He said that BJP was the only political party that does what it promises.

Jagat Prakash Nadda said that present Central Government was committed to make India a ‘Vishav Guru’.  He said that it took years to develop vaccinations of measles, Japanese encephalitis virus, Polio etc. but under the leadership of the Prime Minister Narendra Modi, corona vaccine was prepared within nine months after the first case of Covid-19 was reported in the country. He said that over 190 crore vaccine doses were provided free of cost to the people of the country. He said that biggest vaccination campaign of the world was successfully launched in the country.  He also appreciated the efforts of the State Government in becoming first State in the country in administering first and second doses of the vaccine.

BJP National President said that the Central Government provided free ration to over 80 crore people of the country during pandemic. He said that not only this the Centre Government also succeeded in bringing back over 23,000 students of the country stranded in Ukraine, out of which about 430 students were from Himachal Pradesh. He said that even students of Pakistan succeeded in getting out from Ukraine by hoisting Indian Flag on their vehicles. This was the picture of changing India and was possible only due to the strong leadership of Prime Minister Narendra Modi, he added.

Jagat Prakash Nadda said that today 400 billion dollar export from India was possible only due to the able leadership of Prime Minister Narendra Modi despite the pandemic. He said that over 9.37 lakh farmers of the State were being provided Rs. 6000 per year under the Pradhan Mantri Kisan Samman Nidhi Yojna. He said that now the people of the country do not vote on basis of political consideration, but they vote for development.

National BJP President said that the State Government under the able leadership of Chief Minister Jai Ram Thakur has ensured that all those families not covered under the Ayushman Bharat and Ujjawala Yojna were covered under the HIMCARE and Himachal Grihini Suvidha Yojna respectively. He said that over 6000 kilometer roads were constructed in the State during the present tenure of the State Government headed by Chief Minister Jai Ram Thakur.

BJP National President was accorded rousing welcome en-route from Bhuntar Airport to the venue of the public meeting at Rath Maidan, Kullu.

Chief Minister Jai Ram Thakur said that the State was fortunate that the son of the soil was heading the largest political party of the world. He said that almost every Party worker has a sweet memory of working with the BJP National President. He said that a common man from a humble background can lead the biggest political Party of the world could happen only in a BJP. He said that it was the fortune of the Nation that it was being headed by world leader, Prime Minister Narendra Modi. He said that Prime Minister always considers Himachal Pradesh his second home and was always considerate towards the developmental demands of the State. He said that during the corona pandemic the National leadership ensured that no one in the country was deprived of food, masks, sanitizers and other essentialities.

Jai Ram Thakur said that the Congress leaders were day dreaming of coming to power in the State, but they must know that people of the State have made up their mind to ensure that the BJP again comes to power in the State so that the pace of development goes uninterrupted. He said that it was due to the development-oriented policies and programmes initiated by the Centre and State Governments that the BJP succeeded to again form Governments in all the four states of the country where elections were held recently. The Congress leaders after this victory has gone into hibernation after their crushing defeat in these four states, he added.

Chief Minister said that it was due to the endeavours of the Prime Minister that the nation succeeded in developing indigenous vaccine and also successfully launching the biggest vaccination campaign of the world. He said that the State also ensured that effective steps were taken to curb the spread of this virus. The State also emerged first in the country of cent per cent vaccination of the eligible age group in the State.