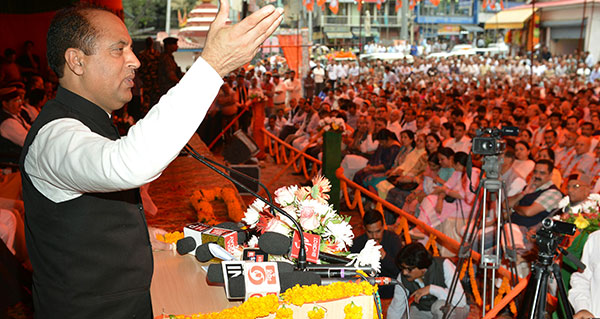 Chief Minister Jai Ram Thakur and National Working President of BJP Jagat Prakash Nadda were today accorded rousing welcome enroute from Bilaspur to Mandi at Ghagus, Beri, Barmana, Salapad, Sundernagar, Balh, Ner Chowk etc. On arrival at Mandi, an  ‘Abhinandan Samaroh’  was held at  historic Seri Manch to welcome Jagat Prakash Nadda on his maiden visit to the State after assuming the office of National Working President of Bhartiya Janta Party.
Speaking on the occasion, Chief Minister said that although Himachal Pradesh has a small State but it is due to the benevolence of Prime Minister Narendra Modi that Himachal Pradesh had gained prominence as he has entrusted a big responsibility on Jagat Prakash Nadda to lead the world’s  biggest political party. He said that Shri Nadda had not only brought laurels to the state and its people, but also raised the hope of crores of party workers to make it a best party of the world. 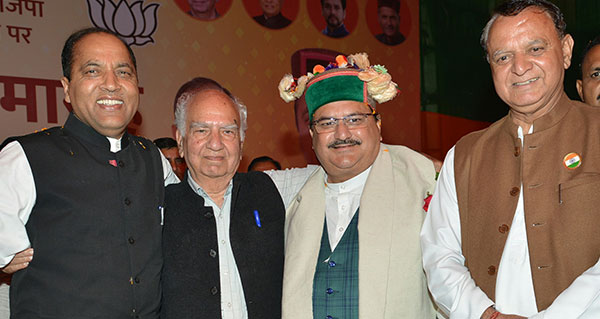 Jai Ram Thakur said that today the BJP was in power in seventeen states of the country and credit for this goes to each and every party worker. The Nation today has a strong leadership in form of Prime Minister Narendra Modi and world leaders have acknowledged that India was poised to emerge as a world power under his dynamic leadership. He said that now the Article 370 and 35 A have become history and India had one Constitution and one Symbol.
He said that the people of the state gave their full support and ensured the landslide victory of the BJP candidates in the Lok Sabha elections. The BJP set a record in itself by winning in all the 68 Assembly constituencies of the State and vote share of the BJP was highest in the state.He said that the highest victory margin in term of vote percentage was also of BJP MP Kishan Kapoor from Kangra parliamentary seat. 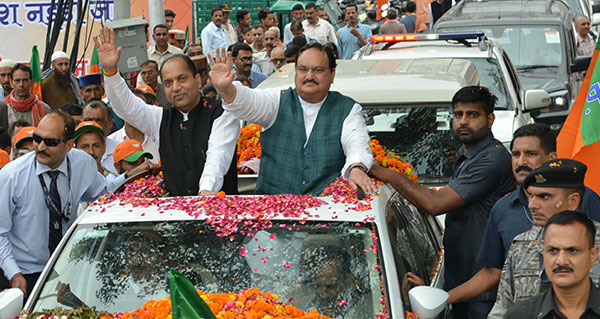 Jai Ram Thakur said that State Government was laying special emphasis on strengthening basic infrastructure and promoting industrialization with a view to make the State self-reliant and ensure inclusive development. He said that balanced and equitable development of the State was main focus of the state government. He said that ‘Rising Himachal Investors Meet’ was being organized at Dharamshala on 7th and 8th November this year to attract investors to the state on a large scale.
Jagat Prakash Nadda while thanking the people of Mandi district for according him a warm welcome from Salpar to Mandi said that this love and affection would give him strength and motivation to work with more dedication and commitment to come upto the expectations of crores of BJP workers of the country. He said that the BJP had emerged as the world’s largest party under the leadership of Amit Shah and now he would ensure that the BJP becomes the best party of the country.
Shri Nadda said that there were over thousand political parties in the country and all of them except the BJP were party of a particular political family. The BJP was the only party where a common party worker could also become Prime Minister, Party President and Chief Minister. He said that the BJP was a party with vision to make India the New India and was not afraid of taking bold decisions. 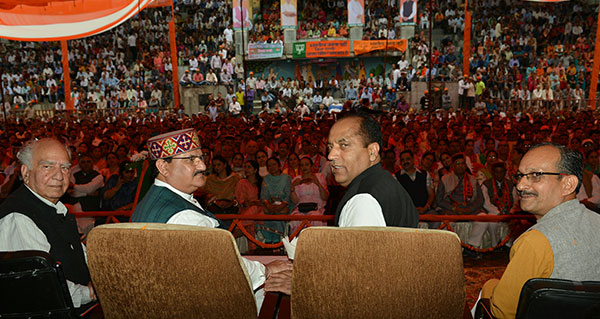 Shri Nadda said that world had acknowledged the strong and able leadership of India and it was due to the political will power of the Prime Minister that today with the scrapping of Article 370, the Nation now had one “Vidhan”, one “Nishan” and one “Samvidhan”. He said that decision on Triple Talaq was a milestone decision which had ensured empowerment of Muslim women.
Shri Nadda said that the Prime Minister has launched several schemes for the welfare of every section of the society which had succeeded in bringing a sea change into the lives of the common man. He said that Ayushmaan Bharat, Ujjawala Yojna, Jan Dhan Yojna, Atal Pension Yojna and Digital India schemes have transformed India into a developed India.
Former Chief Minister Shanta Kumar said that the people of the State had not even dreamt that a leader from a small state with total population of about seventy lakh would be honoured to lead the largest political party of the world. He expressed hope that the BJP would become a ‘Uttkrisht’(Excellent) party under the leadership of Jagat Prakash Nadda and Himachal Pradesh would make history by repeating the government in 2022 elections. He also appreciated the efforts of the State Government to organize Investors Meet which would go a long way in providing ample employment and self employment opportunities to the educated youths of the state.
State BJP President Satpal Satti said that it was a rejoicing moment for each and every party worker of the BJP that Shri Nadda had rose to the highest office due to his dedication and hard work. He was holding such a big office which once was earlier held by likes of Shayma Prasad Mukherjee, Pt. Deendayal Upadhaya and Atal Behari Vajpayee etc.
MP Ram Swaroop Sharma said that the BJP was poised to progress by leap and bound under the able leadership of Jagat Prakash Nadda.
Irrigation and Public Health Minister Mahender Singh Thakur, Urban Development Minister Sarveen Chaudhary, Industries Minister Bikram Singh, Deputy Speaker Hansraj, MP  Kishan Kapoor Chairman State Planning Board Ramesh Dhawala, MLAs Col. Inder Singh, Rakesh Jamwal, Vinod Kumar, Inder Singh Gandhi, Hira Lal, Prakash Rana, Jawahar Thakur, Organisation Secretary Pawan Rana, Former Ministers Gulab Singh Thakur and Roop Singh Thakur, Political Advisor to the Chief Minister Trilok Jamwal, General Secretary Child Welfare Council Payal Vaidya, Chairman MILKFED Nihal Chand Sharma were present on the occasion among others.
2019-10-09
idnadmin