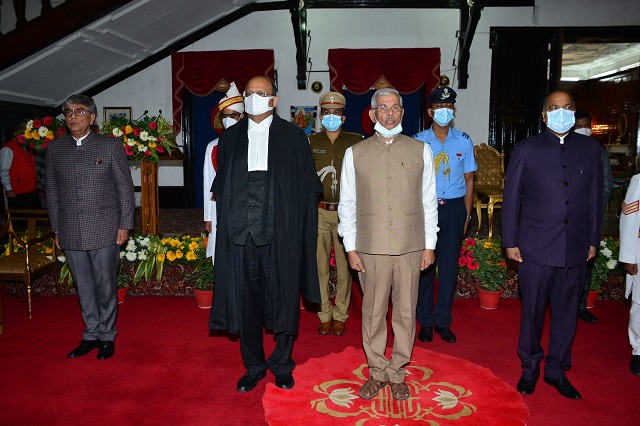 Justice Mohammad Rafiq was sworn in as the Chief Justice of Himachal Pradesh High Court in Shimla on Thursday. He was administered the oath of office by Governor Rajendra Vishwanath Arlekar in a ceremony held at Raj Bhawan. The ceremony took place at the Darbar Hall of Raj Bhawan, where Chief Secretary Ram Subhag Singh conducted the proceedings of oath ceremony and read out the notification issued by the Government of India, Ministry of Law and Justice regarding transfer of Justice Mohammad Rafiq as Chief Justice of the High Court of Himachal Pradesh. Chief Minister Jai Ram Thakur and his wife Dr. Sadhna Thakur were also present on the occasion.

Justice Mohammad Rafiq was born on 25th May, 1960 at Sujangarh in Churu district of Rajasthan. He completed B.Com in 1980, LL.B in 1984 and M.Com in 1986 from University of Rajasthan. He later on joined the Bar and practised as Advocate after enrolment with the Bar Council of Rajasthan on 8th July, 1984. He practised exclusively in Rajasthan High Court at Jaipur in almost all branches of law and especially conducted constitutional matters, service matters, land acquisition cases, land revenue cases, preventive detention cases, customs & excise matters, railway claims cases, tax matters, company matters and criminal matters before the High Court.

He worked as Assistant Government Advocate for the State of Rajasthan from 15th July, 1986 to 21st December, 1987 and Deputy Government Advocate from 22nd December, 1987 to 29th June, 1990. He appeared before the High Court as panel advocate for various Departments of the State Government for five years i.e. from 1993 to 1998. He also represented the Union of India as Standing Counsel from 1992 to 2001 before the High Court. He also represented the Indian Railways, Rajasthan State Pollution Control Board, Rajasthan Board of Muslim Wakfs, Jaipur Development Authority, Rajasthan Housing Board and Jaipur Municipal Corporation before the Rajasthan High Court.