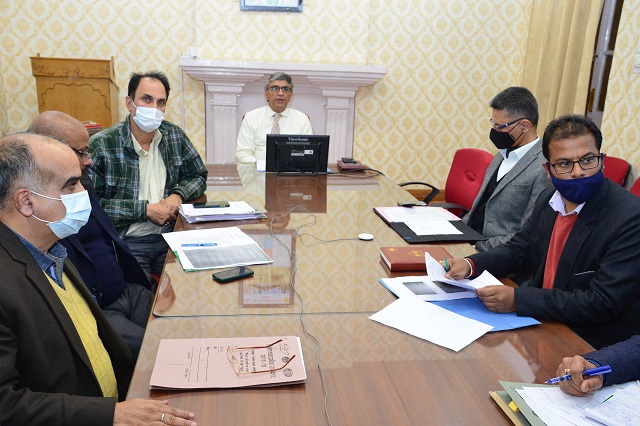 During the meeting, the Chief Secretary directed the Deputy Commissioners and officers of line departments to be prepared for adverse situations and to stock pile of essential items especially for snow bound areas. He said that mapping of vulnerable areas for upcoming winter season should be done on priority to meet exigency.

He also directed to identify vulnerable areas as per the previous experience and deploying manpower and machineries by prioritizing area for snow clearance. He asked the authorities to make special arrangement for adjoining area of Atal Tunnel because large tourist influx could occur in these areas during winter season. He also asked the Deputy Commissioners of low lying areas of the state to make preparedness for cold waves during winters and to provide shelter to those living in open areas.

He also directed the Police Department for formation of Quick Reaction Teams (QRT). He also asked to replace all wooden electricity poles before winters to ensure continuous supply of power. He also asked the officers to give requisition of snow blowers and other machinery required for snow clearance in snow bound areas. He also took stock of preparedness of avalanche prone area.

He also asked to spread awareness on do’s and dont’s of forest and domestic fire.

All Deputy Commissioners, Superintendents of Police and officers of line Departments were virtually present in the meeting.