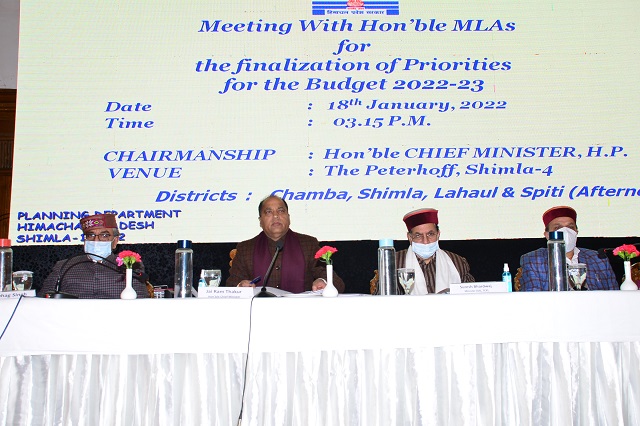 Top most priority must be given to developmental preferences of elected representatives and State Government was also ensuring that the paucity of funds do not come in way of development. This was stated by the Chief Minister Jai Ram Thakur while presiding over the evening session of   meeting with the MLAs for finalization of priorities for Budget 2022-23 with the MLAs of Chamba, Shimla and Lahaul and Spiti districts here today.

Jai Ram Thakur said that the whole world had to face the wrath of corona pandemic and the State Government laid special focus on strengthening of health infrastructure in the State to meet this challenge. He said that there were only two oxygen plants in the State two years ago and today there were 48 oxygen plants in different parts of the State.  He said that Ayushman Bharat scheme of the Union Government and Mukhyamantri HIMCARE scheme of the State Government provided much needed relief to the people during critical illness. Similarly, the Mukhya Mantri Sahara Yojna has been proving a boon to the families with critically ill patients as Rs 3000 per month was being provided to such families under this scheme, he added.

Jai Ram Thakur said that as many as 51 MLAs shared their views during this two day MLA priority meeting. He said that this meeting would go a long way in forming realistic plans for development of their respective areas. He said that all the members were given sufficient time to express their views and highlight their priorities. He assured the MLAs that all the issues raised by them would be taken seriously and efforts would be made to include them in coming budget. He said that adequate funds were being provided under NABARD, CRF and PMGSY for construction of roads and bridges. He said that roads were lifeline for hill economy and the Government was giving top priority to this sector. He said that the State has made tremendous progress in health, education, agriculture and horticulture sectors.

MLA Chamba Pawan Nayyar said that 58 new roads, 5 bridges and 15 building were constructed in Chamba constituency during the last four years and most of them were nearing completion. He said that rope way should be constructed between Chamba to Khajjiyar which would give big boost to tourism development in the area. He urged the Chief Minister to promote Chamba from tourism point of view. He also urged the Chief Minister to provide adequate funds for sewerage plan for Sultanpur.

MLA Bhatiyat Virkam Jaryal urged the Chief Minister to open PWD and Jal Shakti Divisions in Chuwari area of the constituency. He said adequate funds must be provided for maintenance and construction of roads in the area. He also felt the need to open petrol pump in the constituency and Civil hospital Chuwari may be upgraded to 100 bedded hospital.

MLA Chopal Balbir Singh Verma said that snow cutter may be provided and crash barriers must be installed on the roads of the area. He said that funds must be provided for Civil Hospital Kupvi so that it could be completed soon. He said that petrol pump and fire station should be opened at Kupvi. He also felt the need for repair and renovate Forest Houses in the area.

MLA Theog Rakesh Singha while addressing the meeting virtually said that better mechanism of CA store need to be evolved to ensure remunerative price to the farmers for their produce. He said that HPMC run CA store must give preference to farmers of the State for storage of their produce and even steps must take to ask CA stores in private sector to give preference to farmers. He also felt the need to motivate the farmers to adopt high density plants. He also felt the need for opening of a major district hospital preferably at Theog to cater to the health requirements of people of the area. He urged the Chief Minister to upgrade Primary Health Centres of Narkanda and Matiyana to Community Health Centres.

MLA Kasumpti Anirudh Singh said that DPRs of major roads of MLA priorities must be given top priority. He said that Lakkar Bazar bus stand should be transferred to Dhalli to avoid traffic congestion. He said that provisions must also be made for providing funds to open gyms under Mukhya Mantri Khel Yojna. He said that girls college could be opened at Malayana.

MLA Shimla Rural Vikramaditya Singh said that some roads of his MLA priority were still hanging in fire due to delay in preparation of DPRs. He said that drinking water supply must be provided from Kol Dam to areas falling under Shakrodi, Sunni panchayats etc. He said that work on Community Health Centre building Shoghi must also be started soon. He urged the Chief Minister to establish shooting range at a suitable place in his constituency at the earliest. He said that a few financial powers must be provided to the BMO under the Rogi Kalayan Simities.  He said that a milk collection centre must be opened at Shoghi and a sabzi mandi must be constructed at Basantpur.

MLA Jubbal-Kotkhai Rohit Thakur said that priority must be given to the area under the PMGSY, keeping in view difficult topography of the area. He said that Kharapathar tunnel must be constructed to ensure all weather road connectivity to the area, besides reducing the distance from Shimla to Rohru by about 12 kms. He said that provision of crash barriers must be made in DPRs of roads itself to make the road more safe and secure. He also felt the need to bring  high density plantation under the ambit of subsidy. He said that cold store must be established at Kharapathar to facilitate the horticulturists. He urged the Chief Minister to provide adequate staff in HPSEB sub division at Kotkhai and repair and maintenance of 22 KV Power Control Centre at Ghungli Dhar. He also urged the Chief Minister to develop the area from tourism point of view.

Additional Chief Secretary Finance Prabodh Saxena, while welcoming the Chief Minister and other dignitaries present on the occasion, urged the MLAs to give their valuable suggestions so that the same could be included in the budget for the year 2022-23.