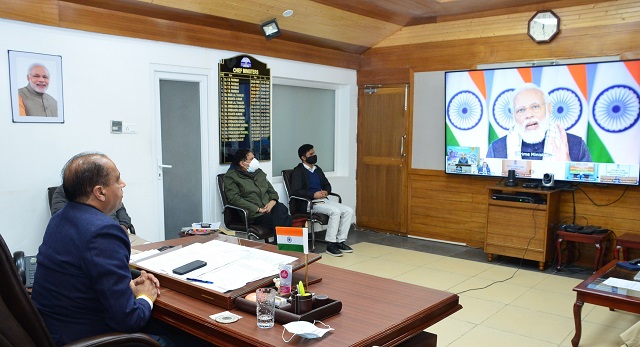 The Prime Minister took direct feedback about the progress and present status of the implementation of government schemes and programmes in these districts. He interacted with the officers and motivated them to achieve saturation of different schemes by various departments in the districts in mission mode, in convergence with all stakeholders.

Prime Minister also appreciated the achievement of Chamba district of the State in increasing the coverage of Common Service Centres to facilitate the people of the district.

Chief Minister thanked the Prime Minister Narendra Modi for appreciating the achievement of Chamba district of the State in increasing the coverage of Common Service Centre from about 67 per cent to over 97 per cent. He said that the Aspirational District Programme was started by the Prime Minister in January, 2018 for the country and Chamba district was also selected under this scheme. He said that total of 112 aspirational districts have been identified by NITI Aayog based upon composite indicators from Health and Nutrition, Education, Agriculture and Water Resources, Financial Inclusion and Skill Development and Basic Infrastructure which have an impact on Human development Index. He said that Aspirational District Programme essentially aims at localizing Sustainable Development Goals, leading to the progress of the Nation.

Jai Ram Thakur said that since the implementation of this programme Chamba district has constantly performed well in different sectors. He said that the district has been ranked second in Health and Nutrition in March, 2019, ranked among best districts in basic infrastructure in November, 2020 and over all second in October, 2021 in the country.  He said that on the basis of above ranking, the district has been provided incentive worth Rs. 8 crore by the NITI Aayog in the form of projects. Projects worth Rs 25.04 crore have been sanctioned under CSR head for the district.