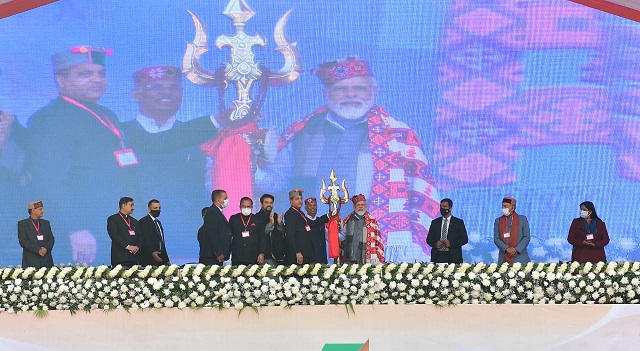 Prime Minister Narendra Modi today inaugurated and laid foundation stones of developmental projects worth about Rs 11,581 crore for the State from the historic Paddal ground in Mandi on the occasion of completion of four years term of the present State Government.

Prime Minister inaugurated 111 MW Sawara Kuddu Hydro Electric Project virtually from Mandi constructed by the HP Power Corporation Ltd (HPPCL) at a cost of Rs 2082 crore. Constructed near the famous Hatkoti temple on the Pabbar river in Shimla district, this project would generate 386 million units of power per annum and generate annual revenue of about Rs 120 crore to the State through HPPCL. He also laid foundation stones of Rs 7000 crore Renuka ji Dam on Giri river in Sirmour district and 66 MW Dhaulasidh Hydro Electric Project, a joint venture between the Government of India and the State Government located on the Beas river in Hamirpur and Kangra districts. This Project being executed by the Satluj Jal Vidhut Nigam Ltd., would be completed by spending an amount of Rs 688 crore. In addition to this, he laid foundation stone of 210 MW Luhri Stage-I hydro-electric project to be constructed by spending an amount of Rs 1811 crore on Satluj river in Shimla and Kullu districts of the State.

The Prime Minister said that ‘ease of living’ of the people of the country is one of the foremost priorities and electricity plays a huge role in this. Hydro-power projects launched today reflect India’s commitment to eco-friendly development. “When the Shree Renukaji Dam project on the Giri river is completed, a large area will be directly benefited by it. Whatever income will be generated from this project, a large part of it will also be spent on development here”, the Prime Minister remarked.

The Prime Minister reiterated the changed working style of the new India. He talked about the speed with which India is meeting its environment related goals. The Prime Minister mentioned that “ In 2016,India had set a target to meet 40 percent of its installed electricity capacity from non-fossil energy sources by 2030. Today every Indian will be proud that India has achieved this goal in November this year itself.” The Prime Minister continued “the whole world is praising India, for how our country is accelerating development while saving the environment. From solar power to hydro power, from wind power to green hydrogen, the country is working continuously to make full use of every resource of renewable energy”, the Prime Minister informed.

The Prime Minister came back to his theme of elimination of single use plastic. He said that the government is alert about the damage caused to the mountains due to plastic. Along with the nationwide campaign against single use plastic, the government is also working on plastic waste management. Touching upon the need for behaviour change, he said “tourists also have a huge responsibility in keeping Himachal clean, free of plastic and other waste. Plastic has spread everywhere, plastic going into rivers, we have to make efforts together to stop the damage it is causing to Himachal.”

The Prime Minister praised the growth of the pharmaceutical sector in Himachal Pradesh. He said “If India is called the pharmacy of the world today, then Himachal is the force behind it. Himachal Pradesh has helped not only other states but also other countries during the Corona global pandemic.”

Referring to the stellar performance of the state, the Prime Minister said “Himachal outshines the rest in providing the vaccine to its entire adult population. Those who are in the government here, are not immersed in political selfishness, but have devoted their full attention to how every citizen of Himachal gets the vaccine.”

Prime Minister Narendra Modi also presided over the second Ground Breaking Ceremony of the Himachal Pradesh Global Investors’ Meet at Mandi. In the event, 287 Investible Projects worth ₹ 28,197 were grounded. These grounded projects are expected to provide impetus to economic development in the region as well as generate around one lakh job opportunities

He also unveiled the ‘Swaran Jayanti Energy Policy’ of the State on the occasion.

Prime Minister was also felicitated by the Chief Minister by presenting him shawl, Himachali Cap and Trident.

Earlier, the Prime Minister was accorded rousing welcome by the Governor, Chief Minister and his Cabinet colleagues on arrival at Kangnidhar Halipad, Mandi.

Jai Ram Thakur said that it was a record in the history of Himachal Pradesh that Prime Minister inaugurated and laid foundation stones of development projects worth Rs.11,581 crore in single day. He said that Renuka ji National Project, foundation stone of which was laid by the Prime Minister today would not only generate 200 million unit of energy in a surface power house with 40 MW installed capacity, but would also meet the 40 per cent drinking water requirement of Delhi by supplying 23 cubic meter water per second to National Capital Territory of Delhi.

Chief Minister said that over 4.25 lakh families of the State have been covered under the Ayushman Bharat Yojna of Government of India and 1.16 lakh beneficiaries have been provided free treatment of Rs. 139.13 crore. Similarly, under the Mukhy mantri Health Care Yojna- HIMCARE, 5.13 lakh families have been registered and about Rs 200 crore spent on providing free treatment to 2.17 lakh people, he added. He said that under Sahara Yojna Rs. 3000 per month was being provided to families having a critically ill patient. He said that till date Rs 56.13 crore have been spent to benefit 16,820 beneficiaries.

Jai Ram Thakur said that over 6.09 lakh people were being provided social security pension in the State and about 1.95 thousand new cases of social security pension have been sanctioned during the tenure of the present State Government. He said that schemes like Jan Manch and Chief Minister’s Helpline 1100 have proved boon to the people of the State for speedy redressal of their grievances nearer to their home and by making a telephone call. He said that as many as 1.36 lakh families have benefitted under the Pradhan mantri Ujjawala Yojna by spending an amount of Rs. 21.81 crore and 3.23 lakh families of the State have been covered under the Mukhya Mantri Grihini Suvidha Yojna by spending Rs.119.90 crore.

Chief Minister said that Atal Tunnel was also the biggest gift of the Prime Minister to the people of the State. He said that this tunnel has not only proved a boon to people of the landlocked Lahaul Spiti district, but also emerged as a major tourist attraction. He said that it was due to the inspiration and motivation of the Prime Minister that Himachal Pradesh not only became first State in the country in administering the first dose of vaccine to cent per cent eligible age group, but also becoming first State to achieve the target of cent per cent second vaccination of all its eligible population. He thanked the Prime Minister for providing liberal assistance to the State during this pandemic. He assured the Prime Minister that the State would also effectively administer the booster and precautionary doses of vaccination announced by him from 3rd of January next year.

Jai Ram Thakur said that the State Government would strive hard to break the trend of change of guards after every five years in the State with hard work, dedication and serving the people in a befitting manner. He said that it was due to the double engine government at the Centre and the State that today the State has six medical colleges in Government sector and one in private sector, Atal Tunnel, Satellite Centre PGI at Una, apart from AIIMS at Bilaspur.

Jai Ram Thakur said that the State was also striving hard to achieve the six goals set by the Prime Minister for the State during the address on 6th of September. He said that drone technology was being promoted in the State in a big way, particularly in health and other sectors. Medicines were carried from Tanda to Dharamshala by using drone technology, he added.

While welcoming the Prime Minister in the 2nd Ground Breaking Ceremony, Chief Minister said that the people of the State were grateful that the International Investors Meet held at Dharamshala in 2019, was graced by the Prime Minister in which MoUs worth over Rs 96,000 crore were signed, and 1st ground breaking ceremony of projects worth Rs. 13,500 crore was held on 27th December in the same year.