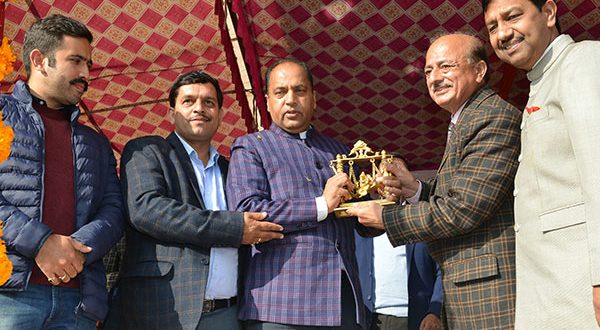 The fairs and festivals are the integral part of our rich cultural repository and provide wholehearted entertainment to the people of the area. This was stated by Chief Minister Jai Ram Thakur while addressing people on the occasion of closing ceremony of ‘Anaukhi Daali’ Mela (fair) in Jubbarhatti village near Shimla today. This is a 120-year-old fair and is organised to promote ‘Thoda’, a martial art form, and spread awareness among youth on environmental protection.

Chief Minister said that the people of the State gave massive mandate to BJP in the Lok Sabha general elections and thereafter in the bye-election of State Assembly. He said that India has regained its old glory under the able and vibrant leadership of Prime Minister Narendra Modi. He said that even the leaders of most powerful nations of the world have acknowledged the strong leadership of Narendra Modi. He said that abrogation of Article 370 was possible due to the strong political will power and today India is ‘one nation with one Constitution and one national flag’.

Jai Ram Thakur said that the decision regarding Sri Ram Janambhumi had paved way for construction of a magnificent temple of Lord Ram at Ayodhya. He said that Jan Manch was proving to be a boon to the people of the State for speedy redressal of their grievances. He said that going a step forward, the Government has launched Mukhiyamantri Sewa Sankalp Helpline 1100 for speedy redressal of public grievances. He said that to cover the left out families under Ayushmann Bharat, the State Government launched Him Care Scheme which has so far benefitted over 45,000 people of the State. He said that the State would soon become the first Smoke Free State of the country as Central and State Governments had launched ambitious schemes Ujjawla and Himachal Grihini Suvidha Yojana for providing LPG connections. 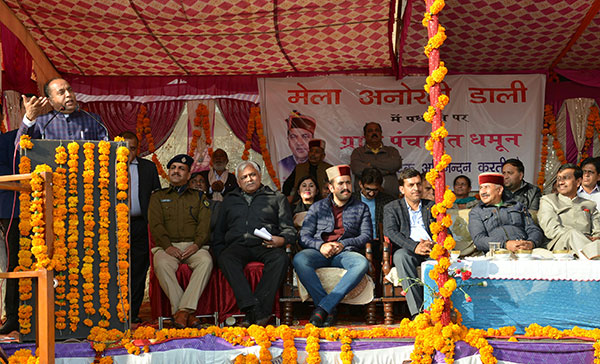 Jai Ram Thakur also announced that work of Sabzi Mandi Tutu would be expedited and if land was made available, big Sabzi Mandi would be established in the area.

Local MLA Vikramaditya Singh welcomed the Chief Minister to his home constituency and also raised various developmental demands of the area. He said that the Sabzi Mandi must be constructed at the earliest at Tutu so that farmers of the area could get remunerative prices of their produce.

Shimla District BJP President and Chairman Kailash Federation Ravi Mehta said that people of the area would provide wholehearted support to the State Government, so that Himachal Pradesh could emerge as a model State in matter of development. He said that it was under the leadership of Chief Minister Jai Ram Thakur that programmes like Jan Manch and Chief Minister Sewa Sankalp Helpline 1100 were started in the State. He said it has ensured that grievances of the people were redressed at their doorsteps.

President of local Gram Panchayat Baldev Thakur thanked the Chief Minister for sparing his valuable time to participate in the fair. He also raised various developmental demands of the area.

Chairman Mela Committee Pramod Sharma welcomed the Chief Minister and other dignitaries present on the occasion. He said that the fair was celebrated as a mark of respect to the Lord Nar Singh.