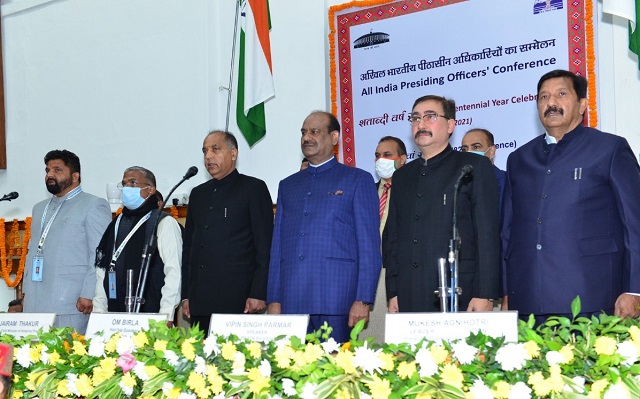 While virtually addressing the inaugural session of the 82nd All India Presiding Officer’s conference held in Himachal Pradesh Vidhan Sabha in Shimla  today to commemorate the centennial year, Prime Minister Narendra Modi said the democracy was not just a system but was also ingrained in our nature and was part of life in India.

He stressed “We have to take the country to newer heights, achieve extraordinary goals in the years to come. These resolutions will be fulfilled only by ‘Sabka Prayas’’. And in democracy, in the federal system of India, when we talk about ‘Sabka Prayas’, then the role of all the states was a big basis for this”.

Continuing with the importance of ‘Sabka Prayas’, the Prime Minister said whether it were solutions to the decade old problems of the Northeast or completion of all the big projects of development that had been stuck for decades, many such works in the country had been done in the past years, with everyone’s efforts. He also cited the fight against Corona pandemic as a great example of ‘Sabka Prayas’.

The Prime Minister insisted that the traditions and systems of the Houses of our legislatures should be inherently Indian. He called for policies and laws of the Government to strengthen the Indian emotion of ‘Ek Bharat Shreshtha Bharat’ . “Most importantly, our own conduct in the House should be according to Indian values. It is the responsibility of all of us”, he added.

Speaker, Lok Sabha Om Birla said that the main objective of the conference was to secure appropriate coordination of parliamentary procedure throughout India. He said that the aim, objective and scope of the conference also was on widening the democratization of the legislatures and evolution of responsibility for better functioning of the democracy. He also felt the need for more use of technology in bring effectiveness in the functioning of House.

Om Birla also expressed hope that the conference would go a long way in strengthening the democratic set up of the country. He said that the Parliament and State Legislatures were the first fora to ventilate public grievances and to ensure the responsibility of executives. He said that problems and situations that arise in the floor of the House should be redressed effectively.

Chief Minister Jai Ram Thakur said that the State Assembly of Himachal Pradesh was known for its high traditions and positive discussions in democratic set up. He said that from the first Speaker of the State Legislative Assembly, Jaywant Ram to present Speaker Vipin Parmar, various dignitaries presided over this august House and conducted and guided the proceedings in a dignified manner.  He also remembered the first Chief Minister of the State Dr. Yashwant Singh Parmar, former Chief Minister’s Ram Lal Thakur, Virbhadra Singh, Shanta Kumar and Prem Kumar Dhumal for their contributions towards the State.

Jai Ram Thakur urged the Prime Minister to provide Nation e-Academy for the State at Dharamshala in Kangra district. He said that Himachal Pradesh was the first state in India, which started paperless work in its Vidhan Sabha which was today known as e-Vidhan. He said that this house had been witness to many important activities in the constitutional history of the country and the state. He said that former Presidents Dr.  A.P.J.  Abdul Kalam and Pranab Mukherjee addressed this august House. Recently, President of India Ram Nath Kovind has also addressed this august House on the occasion of golden jubilee year of statehood of the State and enhanced its pride, he added.

Chief Minister said that the state achieved new milestones and dimensions in its development journey since its formation in the year 1948. Today, Himachal had emerged as a front runner State in matter of development due to the efforts of honest and hardworking people of the state.  He said that per capita of the state was Rs. 240 in 1948 which increased to more than Rs.1.95 lakh in the year 2020-21.  In the year 1948, the length of the roads in the state was 288 km, while today 37,808 km of roads were connecting every nook and corner of the State.

Deputy Chairman Rajya Sabha Harivansh said that the All India Presiding Officers Conference was not only an event to celebrate the 100 glorious years of our democracy, but also a time to ponder over the targets and objectives for next 100 years. He expressed concern over the delay in implementation of assurances given in the House.

Leader of Opposition in the state Mukesh Agnihotri said that first conference of Presiding Officers was held here in 1921 and we all were fortunate that we were celebrating this event as a Centennial Year. He said that the Vidhan Sabha should not hesitate in providing information as at times it had been felt that one could get information through RTI more promptly that of the House.

Deputy Speaker Dr Hans Raj presented the vote of thanks.

Speakers of various Vidhan Sabhas of the country, Secretary General of Lok Sabha, former Speakers of H.P. Vidhan Sabha, Ministers, MPs and MLAs were also present on the occasion among others.