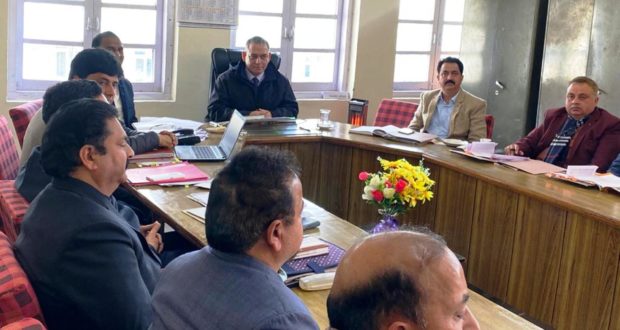 Principal Secretary to Chief Minister Sanjay Kundu who is also Principal Secretary Excise and Taxation, presided over a meeting of all Excise and Taxation Department officers of North Zone at Dharamshala today to review the revenue collection. The tax collection for period April-December 2019 was reviewed in comparison to corresponding period of 2018.

He complimented the officers of the State Excise and Taxation Department for detecting fake input tax credits of cigarettes industry, pharmaceutical industry and tourism industry. In the meeting it was decided to lay thrust on GST collection in mining activities, tourism activities and projects (including hydro-electricity projects).

Sanjay Kundu directed all Officers to effectively expedite the filing of GST returns from its existing level of 85 % to 100 % to realize full GST revenue. Business establishments that are not issuing sale bills for transactions of over Rs 200 should be proceeded under section 122 of GST Act, which has provision of penalty of Rs 10000/- under SGST Act and Rs 10000/- under CGST Act. The officers were also asked to keep eyes on trading of iron and  steel and plywood. The officers were also advised to realize all arrears pending with excise (liquor) contractors and bottlers.

To build the capacity of officers of Excise and Taxation Department, Sanjay Kundu said that the State Government will be requested to provide training to officers of the Department  in reputed national and international institutes like IIMs, Indian School of Business. He said that the State Government would be requested to send officers of the Department for exposure visits to foreign countries which are model countries for GST revenue collection.

Previous: Survey to ascertain exact number of persons with disabilities
Next: state hood function at jhandutta